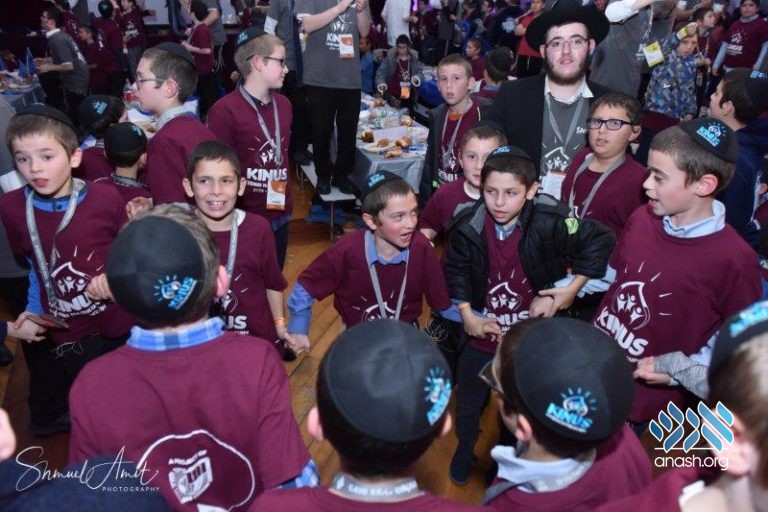 With the Kinus about to begin, the Kinus Tzeirei Hashluchim has released their latest theme song titled ונפלינו.

Young Shluchim who are already packing their bags, and some even en route, to join the annual Kinus Tzeirei Hashluchim in New York, have a new song to listen to on the way.

Titled simply ונפלינו, in line with the theme of this year’s children’s Kinus, it describes the joy that a Young Shliach has on Shlichus when he appreciates the special connection he has with the Rebbe.

“This is the fourth song that Rabbi Shneur Zalman Minkowitz composed for the Kinus, and it’s clear to see why we keep coming back for more,” said Berel Bendet, who directs the Kinus. “His ability to combine a powerful message and eloquent lyrics into an upbeat Niggun is second to none.”

Under the lyrics below you can also find the songs from previous years.

Mendele is a young Shliach living far away.
Different from the other children with whom he does play.
Yarmulke and tzitzis Mendel wears alone.
The only child with no TV at home.

Sometimes on Mivtzoim people look the other way.
But somehow his joy on his Shlichus gets stronger every day.

A lonely island there may be no land in sight
But I’m a lighthouse here to make the ocean bright.

וקרבתנו
it’s my pride and dignity
You brought me closer, Rebbe you believed in me.

The Rebbes image shines from within me
שלוחו של אדם
is my identity.

A Shliach is a Dugma Chaya – Theme Song from Tzeirei Hashluchim on Vimeo.