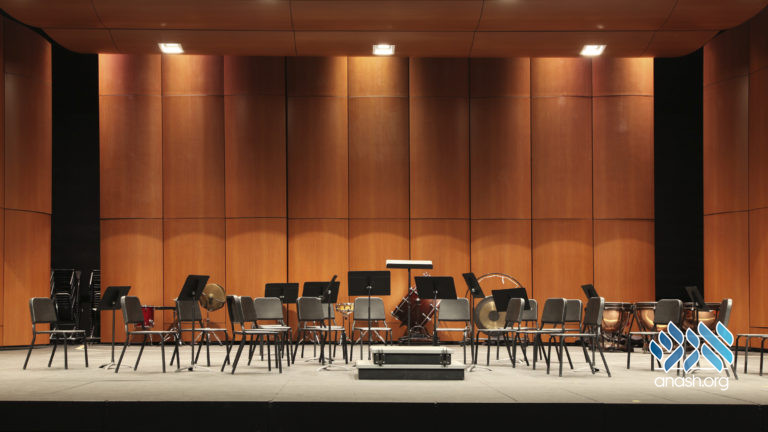 When a rebbishe einikel who taught music in Kfar Chabad was reluctant to teach girls, the Rebbe encouraged him to go ahead. A lesson on standards and sacrifices.

Reb Shmuel Rubin was a chassidisher Yid, a Ropshitzer einikel, who lived in Eretz Yisroel. He was very talented with music, and he made his living teaching music. This brought about his connection with Lubavitch, as he was employed to teach music in Kfar Chabad (Beit Sefer Limlacha) and other Chabad institutions.

Once, Rabbi Shmuel Chefer approached him, and told him that he would like him to begin teaching a class in the girls’ school as well. Rabbi Rubin balked at this idea. However, Rabbi Chefer was persistent. He explained that the position was needed, and the moisad was not in a position to hire two separate people. The implication was clear, if he would not consent, his other employment would be in jeopardy.

Rabbi Rubin was very torn. He didn’t know how to decide. He had an upcoming chasuna in America, which he intended to travel to, and decided to present his dilemma to the Lubavitcher Rebbe.

Sure enough, he managed to arrange a yechidus, and, upon entering the Rebbe’s room, presented his question. “What are you worried about?”, the Rebbe questioned, “is it the problem of yichud? Surely the Rabbonim will set it up in such a way that there will be no halachic issues.”

Rabbi Rubin did not respond. He understood that the halachic issues of yichud could be adequately addressed, but he was nonetheless very uncomfortable with the idea. When he remained silent, the Rebbe continued: “Vos den, ess iz geder kedusha?” Is what you are concerned about not a halachic issue, but the idea of compromising on your standards of holiness?

Rabbi Rubin could not speak, but he nodded his head vigorously, feeling that that defined precisely what concerned him.

The Rebbe picked up his holy hand and reached over the desk (and, if I understood correctly, he placed his hand over rabbi Rubin’s hand) and said: “Reb Shmuel, yedder neshama vos ihr vet ratteven, vet dos zein eiere, un ich zog eich (tzu?) az dos vet eich nit shatten!” Any neshomo that you manage to save (as a result of your sacrifice) – you will get the credit for, and I can reassure you that you won’t be harmed in any way spiritually as a result.

A postscript to the story:

Years later R’ Shmuel’s son (the one who told me the story) was newly married and was in America with his wife. They were walking in Crown Heights, when his wife met an old acquaintance, whom she hadn’t seen in many years. They greeted each other and did some ‘catching up’. When the acquaintance heard that she was recently married, she inquired who the chosson was. When she was told it was Rubin, and verified which Rubin etc., she became excited, and exclaimed “He is the son of R’ Shmuel Rubin. R’ Shmuel Rubin hot mir geratevet!” He is the one who saved me!

He was struck by the fact that that was the exact words of the Rebbe. They don’t know how many other neshamos were saved, but they had that one confirmed neshama that was saved as a result of following the Rebbe’s directives!

In a remarkable hashgocho protis, this story was related to me on the night of Rosh chodesh Kislev. I think this story encapsulates the avoda of shlichus.

This is also the story of the Parsha of this week. Yaakov left Ber Sheva, he left the Yeshiva where he spent years immersed in the holy Torah, and he travelled down to Choron, to the place of Lovon, to the center of impurity, in order to engage in avodas habirurim – to refine the world and elevate the nitzotzos of kedusha.

Yaakov, in this week’s Parsha, makes the ultimate sacrifice. He leaves behind everything dear and precious and holy, he departs from an environment and atmosphere of spirituality and holiness, and descends to an environment in which he is forced to associate with the most depraved company, with Lovon ho’arami, and engage with him. He surely had ample cause to worry for his own spirituality.

But Yaakov made this sacrifice for the sake Hashem, for the sake of establishing the Jewish nation. Not only was he not harmed, but he attained the greatest heights; – ויפרוץ האיש מאד מאד!

This is the story of our forefather Yaakov, and it is the story of each and every shliach. They sacrifice all that is dear and precious in order to save a Yiddishe neshama. And the Rebbe’s protection accompanies them, guarding them from harm, and helping them attain ever greater heights.

But there is – perhaps – one important prerequisite, that we can – perhaps – derive from the above story:

It is necessary for the shliach to be concerned about his own kedusha, he needs to feel that any possible jeopardizing of his own spiritual level is the ultimate sacrifice, that can only be warranted in order to save another Jew. Every moment spent in an atmosphere of lesser (or questionable) holiness (even when it is fully in accordance with halacha) is objectionable to him, is one that he will yearn to be free of as soon as possible. With that attitude, the descent is one that avoids any danger.

With respect to this, I found a statement of Yaakov Avinu to be extremely noteworthy:

When Yaakov first suggested leaving Choron, after Yosef was born, he says to Lavan –  “שלחני ואלכה אל מקומי ולארצי“. Let’s remember, this is not some young kollel yungerman, still wet behind the ears, who finished his year or two-year stint and is returning home. Yaakov had spent 14 years in Choron (and he had left his birthplace some years before that). During that time, he married (4 wives) and established a family of 11 children (not counting any additional twins). He established significant roots in his locale.

One would expect someone in that situation to say ‘I want to go visit my parents’. Or he may say ‘The time has come for me to move on, to try my luck elsewhere’. But he is bound to see his current place as his (for the meantime) current home. A shliach who spent years establishing a Jewish presence in his state or city eventually may find his comfort zone there. Of course, he goes to visit 770 as often as he can, and he knows that he derives strength from there to continue. But afterwards, he returns “home”.

But Yaakov, at the end of the 14 years, after all of the progress he had made during that time, was unequivocal. I am here for an important purpose, I had a crucial mission that I needed to carry out here. But never did I become comfortable here. This is not my place and not my land. After 14 years (and surely the same was true later as well), I know that I am only here by necessity, and the moment I can, I will return to Eretz Yisroel, to Yitzchok, which is the only place that I can call my place and my land.

At no point did Yaakov become, ch”v, desensitized or indifferent. He was always conscious that his standards were the standards of “geder kedusha”, – of holiness, chassidishkeit and emess. He never forgot that the glamour and glitter of the world, of olam hazeh, was the antithesis of everything that he stood for, and – regardless of how much he needed to work with it – it could never become his place. He knew that the moment he would be able to leave, then and only then could he be going to his land and his place.

R’ Heschel Ceitlin a”h was a chassidishe Yid living in Montreal. When the Rebbe spoke (one of the times) about the importance of owning a home (rather than renting, – something the Rebbe frequently advocated), he wanted to carry out the Rebbe’s wish, as a chosid, and planned to purchase a house (in place of the one that he was renting).

But (I heard) here, R’ Heschel faced a dilemma: You see, to buy a house (unless you have all the cash up front, which most people don’t), you need a mortgage. And in order to apply for a mortgage, the applicant needs to have a checking account. Which is actually one of the simpler criteria.

But R’ Heschel didn’t have a checking account. Because he had never entered a bank. As a matter of principle, he would not go into a bank. To him a bank, which was all about money and the obsession with material pursuits was the antithesis of everything that he stood for and dedicated his life to, and it was not a place where he would willing be seen.

Not knowing what to do, and as a true chosid, he wrote to the Rebbe about his dilemma. (I don’t know exactly what the Rebbe responded, but, apparently, he ended up acquiring his house).

Possibly, we need to feel that aversion to the bank and all that it represents (or whatever would be for us a deviation from our expected standards of kedusha). And only then can we truly use the bank (and – especially – all of the money in the bank…) for the sake of building a mishkan and making the world into a dira lo yisborach. We need to constantly remember that our standards, our place, are the standards of a chosid, of a tomim, of a shliach. No matter how much time we, necessarily, may spend with a world that is decidedly removed from that, we never stop yearning for our true place. ארצי, our true desire and yearning (ארץ שרצתה לעשות רצון קונה), is for G-dliness and holiness.

This approach ensures our success in saving the neshomos that we set out to save, and in being worthy of the Rebbe’s reassurance that we will emerge unscathed, and even better than before.

In a more general sense, this is true about our sojourn in golus. Regardless of the important achievements that we need to do here, this can never become, ch”v, our comfort zone. At every moment it has to remain crystal clear to us that this is not our place, and we have to cry out to Hashem (לבן – לובן העליון) with all of our hearts שלחני ואלכה אל מקומי ולארצי! Our only place is together with our Father, at His table, and our only land, our home, is back in Eretz Yisroel, with Yitzchok (when we will say to him ki atoh avinu), in the rebuilt beis hamikdosh NOW!