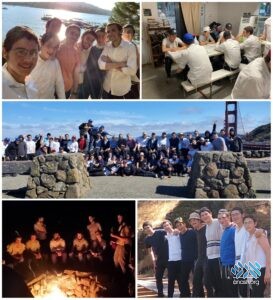 Despite challenges posed by Coronavirus, the Hanhala and Shluchim to Los Angeles Mesivta pulled off an unbelievable successful summer program in Madera, California.

After several dreary months of Zoom Seder in quarantine, the bochurim of Yeshivas Ohr Elchonon Chabad Mesivta (LA) had almost given up on their summer. Alas, due to Covid, the legendary YKLA summer program didn’t seem like it was going to be a reality this year.

But the shluchim and Hanholo of LA mesivta did not despair. As soon as the green light was given, a mere two weeks before the summer, they moved feverishly into action. Given the restrictions imposed by the state of California, alternate arrangements would have to be made. Finding a suitable location was no easy task, but they finally settled on Putney Ranch Camp.

Boasting comfortable accommodations as well as many on-site activities including archery, paintball shooting and a multipurpose lake that was used for kayaking, mikvah and everything in between, Ranch Camp exceeded all expectations. This was to be home for the greatest summer in the history of YKLA.

Right away the shluchim got to work and began to devise a schedule. Yeshiva seder would proceed as usual with a special curriculum until after girsa. After that teams would participate in the highly competitive sports league or simply enjoy the on-site activities. The day would conclude with a Seder Sichos and an entertaining night activity. And that is how YKLA Extreme was born.

It was a hasty job at best, but the shluchim davened that this summer should be a success and an opportunity for the bochurim to grow.

And so it came to be. The summer was an unbelievable success, far beyond anyone’s wildest imaginations. In the words of the winning color war song “I’ve come to realize the importance of my friends, I learn with and farbreng, small things go a long way, I feel the drive for learning like never before…”.

Every Shabbos was spent in a memorable way, with different Mashpiyim from the Yeshivas Hanholo joining the program each week. The song filled Friday nights and long shabbos afternoon farbrengens were truly magical. There is no doubt that the entire week was enhanced and uplifted as a result of these Shabbosim.

Extracurricular mivtzas encouraged the bochurim to increase in both the quality and quantity of their learning. Of course, no good thing went unrewarded and all participating bochurim partook in several lavish events and received incredible prizes. The mivtzas grand finale culminated in a grand jet skiing trip.