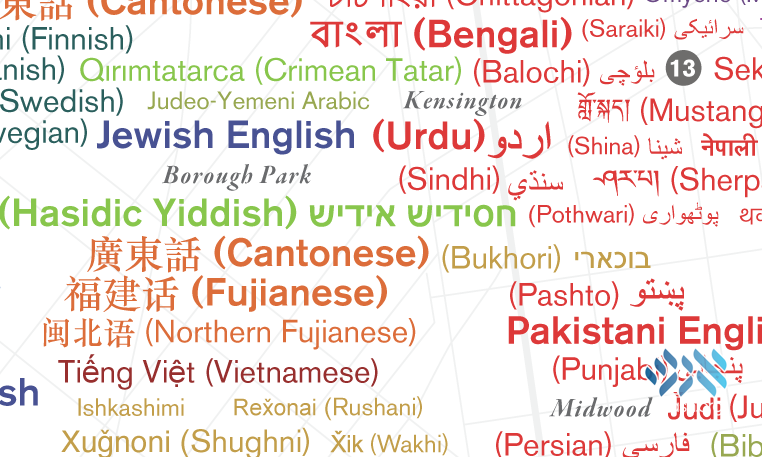 A new map produced by the Endangered Language Alliance list many “Jewish” languages among the 637 languages spoken in NYC.

A decade of work has produced the first definitive map of how many and where languages are spoken in New York City, the most linguistically diverse urban center in the world.

The Endangered Language Alliance found that there are 637 languages and dialects in the Big Apple. These include a dozen versions of English, such as Panamanian English, Newfoundland English and Jewish English.

Jewish English, better known in the frum world as “Yinglish,” combines regular English words with Yiddish grammar. For example, a child will complain that he wants to “go with” his mother to the store, or wonders “what is?” when someone makes an issue out of a teapot. A woman asks a neighbor to “borrow me” a dozen eggs and beams with pride when retelling how “I threw my mother down the stairs a towel.”

Also on the map is “Hasidic Yiddish,” spoken primarily in Boro Park and Williamsburg, and “Litvish Yiddish,” which is common in Kensington and Midwood. The area is also plastered with Aramaic, Judeo-Arabic, Biblical Hebrew and Haketia, more known among Jews as Ladino, the language spoken by Yidden of Spanish origin.

“We believe this is the first detailed linguist-produced map of the city,” the ELA said in a statement, adding that it was releasing it to coincide with the UN-declared International Year of Indigenous Languages and the lead-up to the U.S. 2020 census.

The group said they produced the map as a way of representing many of the smaller, minority, and indigenous languages “that are primarily oral and have neither public visibility nor official support.” They drew on interviews and discussions.

The map shows a cluster of West African languages in Harlem and the Bronx, a microcosm of the former Soviet Union in south Brooklyn, the multifaceted Asian-language diversity of Queens. It notes the difficulty of a project in a city where a single building or block can host speakers of dozens of languages from across the globe.

Seke, for example, is a language spoken by fewer than 700 people, mostly in a handful of towns in Nepal. More than 100 of those people live in Brooklyn and Queens. Some 40 percent of the city’s languages are from Asia, 27 percent from Africa, 18 percent from Europe, 14 percent from the Americas, and the remainder come from Oceania and the Pacific.