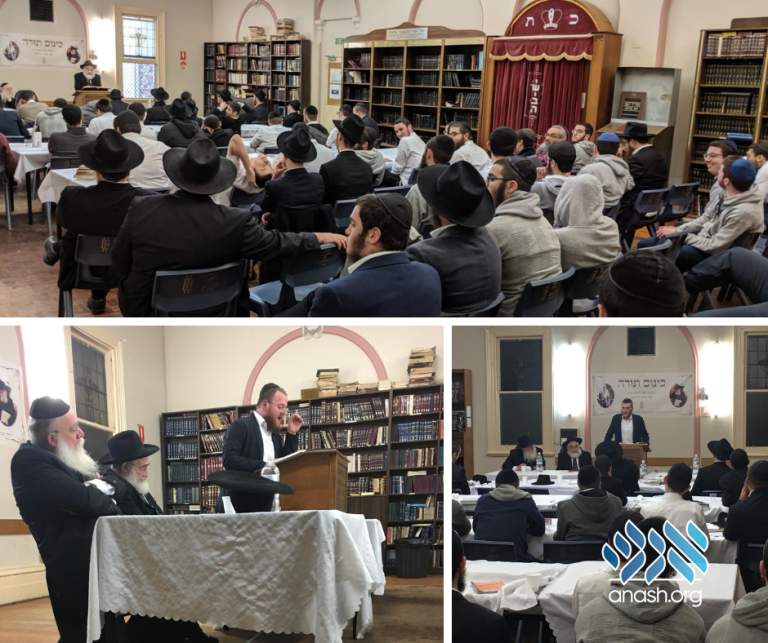 Anash and bochurim of all ages gathered in YG to participate in the siyum and the Kinus Torah that followed.

The Kinus began with shliach Menachem Mendel Sorkin delivering a sicha. In the spirit of Inyonei De’yoma, he presented an explanation of the Rebbe relating to Sha’ar Haiyichud Ve’hoemunah, which we are currently learning in chitas.

The anticipated highlight of the evening arrived amid great excitement: Mendel Leder was introduced. He proceeded to deliver a hadran of the Rebbe on Masseches Nidah, connecting the beginning and end of Shas. As the mesayem began reading the tefilos recited at a siyum, the crowd burst into spontaneous singing and dancing, in honor of the Torah.

The gathering continued with words of Torah and inspiration from several rabbonim and bochurim.

Rav Binyomin Cohen, Rosh Yeshiva of Yeshiva Gedola, discussed the obligation to learn Torah day and night. Rav Zvi Telzner, rav of anash in Melbourne, began by encouraging the bochurim to “Me’menu Yiru Vechen Ya’asu,” before delving into a discussion on the kashrus of milk.

Rabbi Mendel Krasnjanski, Magid Shiur at Yeshiva Levi Yitzchok, in a display of genius, taught the bochurim about the halachos relating to punishments for transgressing positive mitzvos. Rabbi Yonasan Johnson, Rosh Kollel of Kollel Lubavitch in Melbourne, delivered a halachik dissertation regarding the rules of tying knots on Shabbos.

The formal segment of the evening concluded with two more bochurim, Ari Raskin and Nochum Zalman Kahn, coming up to speak. The in-depth analysis of Sha’ar Hayichud Vehoemunah continued, with each bochur presenting a well prepared iyun on Tanya.

After the speeches, the bochurim participated in a Seudas Mitzvah and farbrengen in honor of the Siyum Hashas.

“Ashrei Ayin Roasash Kol Eleh”, how lucky are the eyes that beheld this tremendous simcha. Surely the evening gave much Nachas Ruach to our beloved Rebbe.