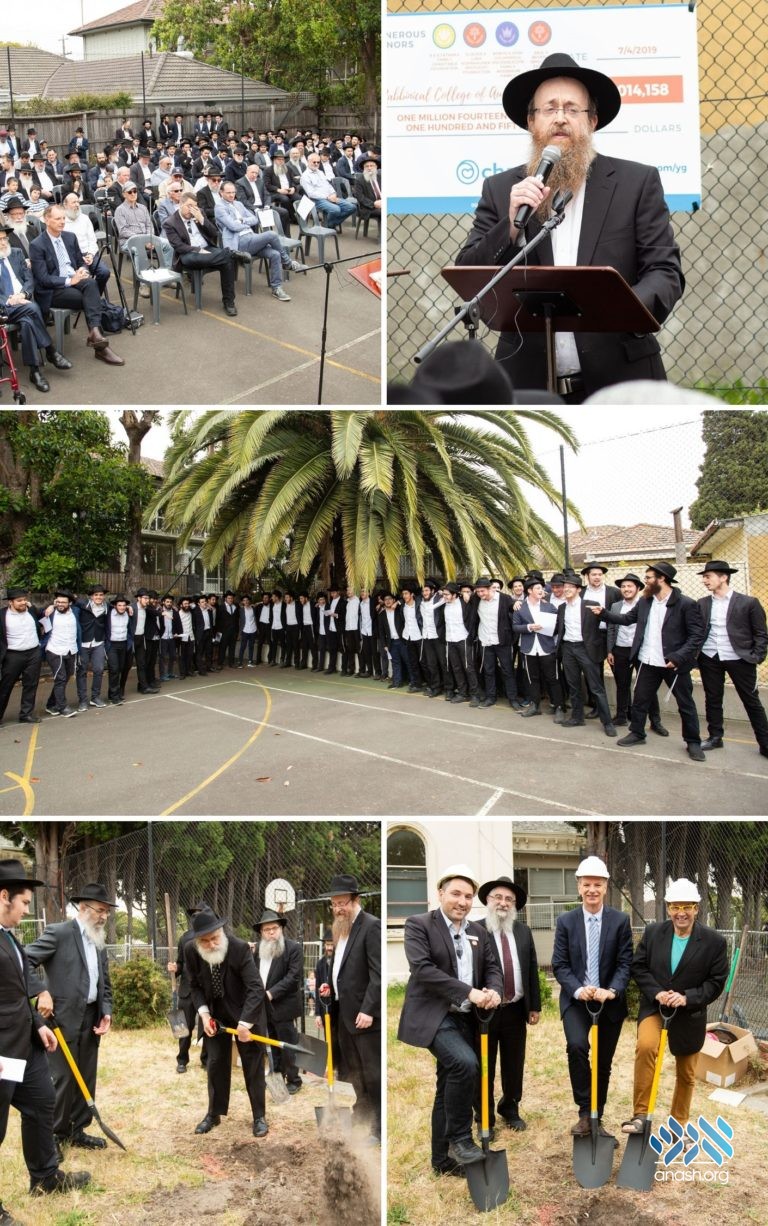 After many years of planning and fundraising, the Rabbinical College of Australia & New Zealand (Yeshivah Gedolah Melbourne) conducted a ground-breaking ceremony to launch Stage 1 of its most ambitious project yet – a multi-stage extension and redevelopment of its Alexandra Street campus.

The weather was a perfect backdrop for the historic event, which was well-attended by local politicians, City Council representatives, rabbis and lay leaders, supporters, students and friends who all participated with great excitement in this important initiative.

The event was opened and chaired by Chazan Dov Farkas (Caulfield Shule) who described many of Yeshivah Gedolah’s milestones over the last five decades of its existence, as well as the magnitude of its contribution to the spiritual infrastructure of Jewish society in Australia, and indeed, around the world. He then introduced Rabbi Binyomin Cohen (Rosh Yeshivah) and Rabbi Shmuel Lesches (Maggid Shiur / Rabbi of Young Yeshivah) who discussed the lessons and religious significance of the ground-breaking. They were followed by Shaya Liberow, Shliach and student at Yeshivah Gedolah, who spoke about the unique impact of a Yeshivah which incorporates the study of Chassidus, and the connection to Yud Tes Kislev.

Yeshivah Gedolah is forever grateful for the loyal and generous support and partnership of the Tatarka Family, who are the major benefactors of the project. On completion, the new building wing will be named in memory of Ronny Tatarka OBM, past member of the Executive. Shmuel Tatarka, representing the family, shared how his father deeply cared about all aspects of Yeshivah Gedolah. Sarah Tatarka and the rest of the Tatarka Family were then honoured and invited to turn over the first soil, followed by other community leaders, dignitaries and benefactors.

The Yeshivah Gedolah students are, of course, the heart and soul of the institution. In connection to Yud Tes Kislev, they presented a hearty and soulful rendition of Padah V’Shalom with musical accompaniment. The event concluded with remarks and expressions of gratitude by Josh Goldhirsch, member of the Executive.

Established in 1966, the Rabbinical College of Australia & New Zealand (Yeshivah Gedolah) is Australia’s first and largest fully residential institute of tertiary Jewish studies. It caters for both Australian and international students. Its graduates are found in all areas of professions, industry and commerce, education, the Rabbinate and outreach work, serving communities here, interstate and overseas.

The first stage of the new and exciting world-class development focuses on the construction of a new two-storey wing which will include an extension to the study hall (Zal), lecture/shiur room, new staff offices, five new bedrooms to accommodate fifteen students, and restoration of the Dining Room to its original grand size. The development was enabled in large part due to the successful Charidy campaign conducted half a year ago. Yeshivah Gedolah remains profoundly grateful to the matchers and 1,100 donors who generously and enthusiastically contributed over one million dollars to the campaign, showing their appreciation and support for the institution which has given so much for more than 50 years.