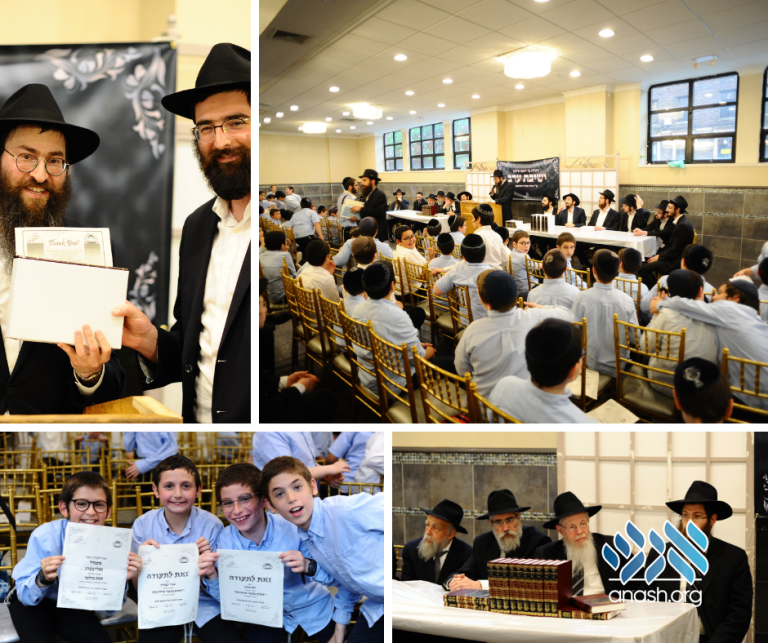 The Lubavitcher Yeshiva Simcha Hall on Crown and Albany in Crown Heights was swarming with hundreds of boys this past Thursday evening, 3 Sivan, ready to receive their long-awaited “seforim vouchers” that they earned this year by attending Yeshivas Erev.

Rabbi Z. Sorkin, the dynamic coordinator of Yeshivas Erev, opened up the grand finale with words of praise for all of the boys that devoted every evening of the week to further themselves in Limud Hatorah – some reviewing their Gemara, others joining the Mishnas Gavriel Project, still others doing their homework and some learning Mishnayos and Tanya Bal Peh.

An amazing “kitzur” project was launched in the Yeshivas Erev in memory of Rabbi Y. K. Marlow.

Every evening after completing their homework the boys learned 10 simanim in “kitzur” that are not covered in their regular school curriculum. After completing each siman they would answer questions and be tested.

The following boys were the top winners of the “Kitzur Project”:

Rabbi Sorkin then thanked all of the Mashgichim and older Bochurim for their great devotion to the boys that made this year such an outstanding one. He presented each of them with a beautiful gift as a token of appreciation

The evening was also the climax of the Shabbos K’halacha project where the boys reviewed all the Lamed Tes Melachos and Halachos.

The following boys were the top winners of the Shabbos K’halacha Competition:

They were each rewarded with a set of Seforim.

At the conclusion of the evening, each of the boys who attended the Yeshivas Erev was presented with a “seforim voucher” to be cashed in at Kehos. The amount each boy received was based on his attendance and accomplishments during the past year.

Yeshivas Erev will continue this summer in the Agudah Shul on Crown Street, every evening from 7:00 to 8:00 pm beginning on Tuesday, 29 Sivan.

The Yeshivas Erev program is grateful to have many our supporters who share in the great mitzvah of Talmud Torah of our children.

To become a supporter, donate at https://yeshivaserev.org/donate.