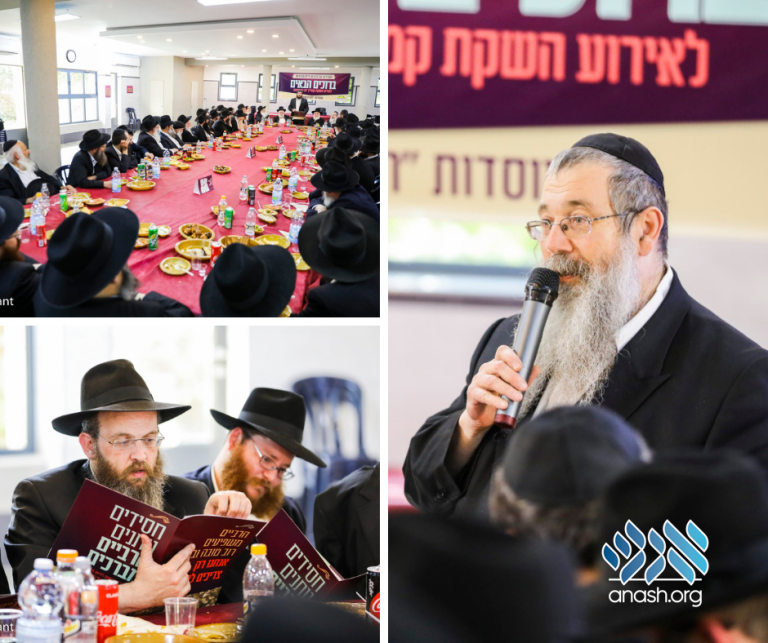 Recently, Yeshivas Toras Emes in Yerushalayim hosted a meeting with 100 participants in preparation of its first crowdfunding campaign.

Yeshivas Toras Emes was the first Tomchei Temimim in Eretz Israel. It was established in 1912 at the request of the Rebbe Rashab, who sent eight bochurim from Russia to Eretz Yisroel together with a mashpia.

“Today we have a very clear goal,” a member of the campaign team said, “to bring the brachos of the Rabbeim to all anash and friends of the yeshiva. It is a great zchus to partner with the yeshiva, as our Rebbeim have written many times.”

At the event, mashpiim of the yeshiva shared how important this mosed was in the eyes of the Rebbeim. Rabbi Binyamin Zilberstrom read some of the Rebbe’s brachos to those who assisted in the development of the yeshiva. Rabbi Yosef Tzvi Segal, Rosh Kollel Tzemach Tzedek, highlighted the special relationships between the yeshiva staff and its graduates, emphasizing the tremendous impact such a connection has even decades after a bochur leaves the yeshiva’s four walls.

Rabbi Chaim Shalom Deitsch and Rabbi Yosef Yitzchak Ofen, spoke of the great zchus in specifically partnering with the yeshiva through material donations. They shared words from the memoirs and letters of the Rebbe Rayatz in which rare statements are made about the establishment of the yeshiva.

Rabbi Yudi Bloy gave an overview of the campaign strategy and how crowdfunding works. He shared expert tips for maximizing donations and winning people over to the cause, thereby extending the Rebbeim’s brachos to them.

A presentation given by Rabbi Yehoshua Yusevitz, general director of the yeshiva, highlighted the number of students and related expenses. Rabbi Yusevitz stressed that it is an essential obligation of the organization to take an active part in the fundraising campaign.

The participants came away on a high, imbued with a sense of the mission’s importance and equipped with tools that will enable them to successfully reach another milestone in the growth of Toras Emes.