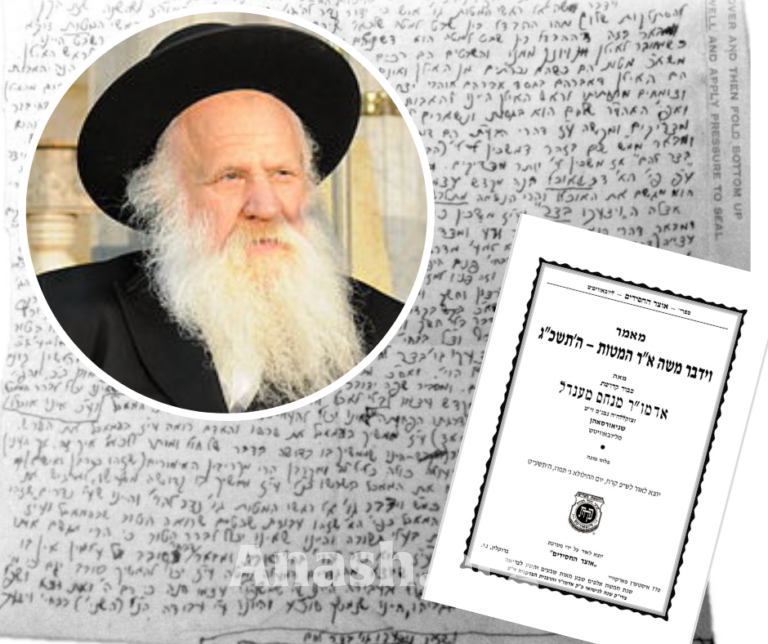 In the archives of the late Rov of Kfar Chabad, Rabbi Mordechai Shmuel Ashkenazi a”h, an amazing discovery was made.

Lahak Hanochos is in the midst of a massive sale for 20 volumes of the Rebbe’s maamarim for the low price of $100, to be published right after Gimmel Tammuz. As the printing was being prepared, Rabbi Chaim Shaul Brook and the editors at Lahak were astounded to receive a Hanacha of a Maamar from 5723 (1963) which had been previously unpublished.

In an amazing Hashgacha Pratis, an entire package of letters was recently discovered in the archives of the late Rabbi Ashkenazi of Kfar Chabad a”h, from his friend Rabbi Berel Lipsker of Crown Heights. Aside for a collection of yomanim, it included a missing hanacha of the Maamar from Shabbos Matos-Mas’ei, 28 Av 5723.

As the Rebbe explained at the time, it was based on a maamar of the Alter Rebbe, written in the handwriting of the Mitteler Rebbe, with comments from the Tzemach Tzedek. The Rebbe delivered it in connection to Shnas Hakan, the commemoration of 150 years from the Alter Rebbe’s histalkus.

Lahak Hanachos encourages anyone who has copies of Sichos, Maamarim or even diaries and letters from those years, to send them to Lahak Hanachos (email to info@lahak.org) for proper research and publishing.

This new Maamar will be included in the new set of Sefer Hamaamarim, and is also available in the attached link.

There are only a few sets left for this special opportunity; to order, log onto lahak.org/25years