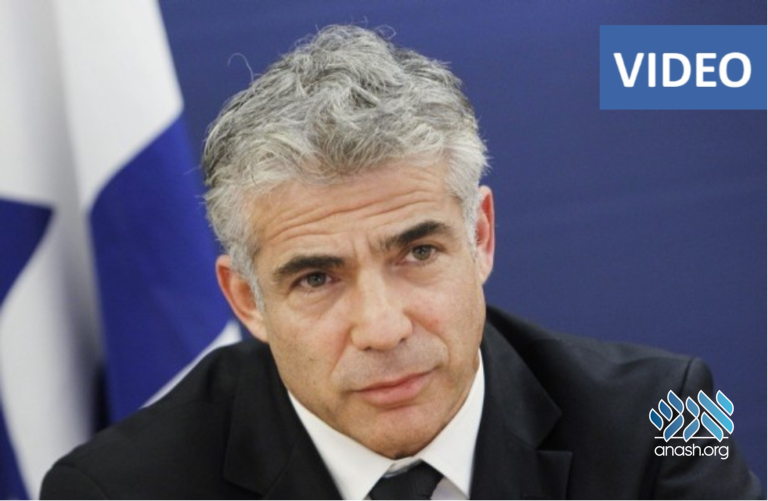 Yair Lapid, a leader of Israel’s Blue and White Party, quoted Perek Lamed Beis of Tanya on his podcast, during an interview with broadcaster and music director Menachem Toker.

“I want to tell secular viewers…” Yair Lapid said, “what the author of the Tanya wrote in Chapter 32 – that on the inside, all Jews are the same.”

Lapid also mentioned his warm impressions from visiting a Chabad center in Detroit for children with special needs.

“We have to learn from Chabad to smile more at others,” Toker stated.

Among other topics, the discussion touched upon the Rebbe’s terminology for hospitals, graveyards and special-needs children, in the Hebrew language.

The Rebbe’s preference for using the term ‘Beis Rofim’ – ‘House of Healers’ as opposed to the accepted ‘Beis Cholim’ – ‘House of the Sick,’ is well-known.

When the Sanz-Klausenberg Rebbe built the Sanz Medical Center in Netanya, his representatives had a yechidus with the Rebbe, who requested: “I would ask you to either call it a ‘House of Healing’ or a ‘Center for Healing’; for one goes to the hospital not to get sick, but rather to heal.” Eventually, it was called Merkaz Refui – a ‘Healing Center.’

In 1980 the Rebbe wrote the following in a letter to the participants of the Major Conference for the Jewish Community On Issues and Needs of Jewish Retarded, (‘Retarded’ being the word commonly used at that time):

“With regard to Jewish retarded people – parenthetically, I prefer some such term as “special” people, not simply as a euphemism, but because it would more accurately reflect their situation…”