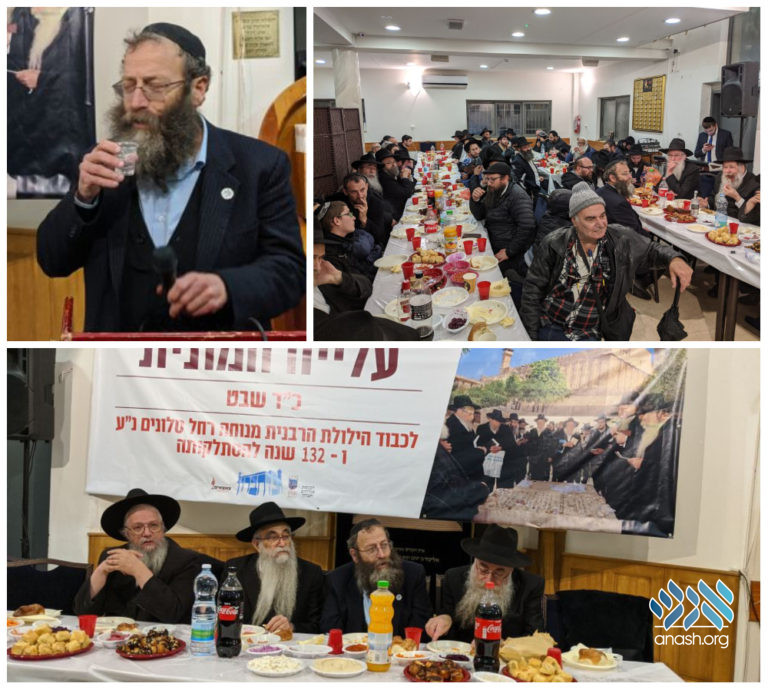 The yartzeit of Rebbetzin Menucha Rochel Slonim, daughter of the Mitteler Rebbe, was marked by her kever in Chevron and with a farbrengen in Kiryat Arba.

The yartzeit of Rebbetzin Menucha Rochel Slonim, daughter of the Mitteler Rebbe and ‘matriarch of Chevron’ was marked in the holy city of Chevron.

Rebbetzin Slonim was born on the 19 Kislev 5559, the same day her grandfather, the Alter Rebbe was released from imprisonment in S. Petersburg. Her father chose the name Menucha saying “Henceforth we shall have a little Menucha.”

In 1845, she moved to the city of Chevron where she was renowned among townspeople, Jews and non-Jews alike, until her passing in 1888.

In recent years, her kever receives many visitors, with hundreds visiting on her yahrzeit, 24 Shevat. As every year, this year as well Chabad of Chevron, headed by Rabbi Danny Cohen, made arrangments for the hundreds of visitors over the 24 hour period of the yahrziet.

“The number of people visiting this year was much beyond any previous year” Rabbi Mordechai Hellinger, shliach in Chevron told Anash.org.

After davening by her kever, Mincha was held in Kollel Menucha Rochel, adjacent to the kever and Ma’ariv was held in Meoras Hamachpela. This was followed by a grand farbrengen in Beis Chaya Mushka Kiryas Arba with Rebbetzin Menucha Rochel’s descendants and other chassidim.

The farbrengen was emceed by Rabbi Folle Brod, director of Beit Chabad Kiryat Arba and addressed by descendants of Rebbetzin Slonim and other distinguished guests. The guests were joined by Chevron resident Baruch Marzel, who has dedicated his life to fighting for the rights for Yidden to live and daven in Chevron. Baruch spoke strongly against Trump’s proposed ‘Deal of the Century’ and explained how the deal is exactly the type of proposals the Rebbe fought against for decades.