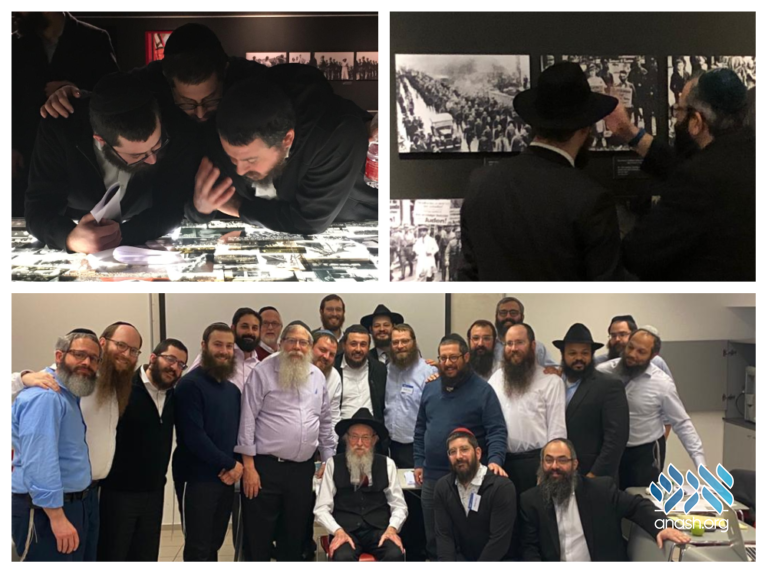 Arriving from the US, Canada, Australia, and Austria, the seminar, organized by Chabad on Campus International, equipped the rabbis and rebbetzins to more expertly teach and discuss one of the most complicated aspects of Jewish history.

Leading Holocaust researchers and academics led the seminars and tackled subjects including the rise of antisemitism in Europe, the Judenrat system, and when discrimination changed into murder. They also focused on topics related to Judaism and the Holocaust including spiritual resistance, Jewish devotion and pride in the darkest of times, and shailos & t’shuvos from the ghetto. The participants toured the Yad Vashem Holocaust Museum through a pedagogical lens and studied the different use of photos taken by SS photographers, Jews in the ghettos, and allied forces. They also analyzed videos and written testimonies, to understand the calamity through personal, human, and Jewish voices.

Concordia University’s Rabbi Yisroel Bernath described the session as “eye-opening”, he said “there’s an assumption that young Jews are passionate about learning about the Holocaust and that’s just not necessarily the case. With the current political environment at Concordia, we struggled to get students to come to hear live survivor testimonials. It’s tremendously valuable to have the expertise to educate students about the Jews in the Holocaust who continued practicing Judaism and identifying with their heritage despite the overwhelming pressures against them.”

“The Shluchim and Shluchos capitalized on an important opportunity to enhance their Shlichus by learning from the world’s leaders on the subject of the Nazi genocide of European Jews,” said Rabbi Yossy Gordon, CEO of Chabad on Campus International. “With the current climate on university campuses, the Yad Vashem seminar provided the participants with the background and expertise to address the depth to which Jew-hatred can take us and a historical context for combating the anti-Semitism.”

The group had the opportunity to speak to Ephraim Mol, a French Holocaust survivor, who related his own story. Esti Hecht, co-director of Chabad at American University, described video conferencing with her son after hearing Mol speak, “I was overwhelmed by the juxtaposition. Here I was with a child survivor who was forced to pretend to be Christian in order to survive—and very few children his age survived,” she said. “The Nazis tried to exterminate the Jewish people but as I saw my child and 30 others in his school with strong Jewish identities, I understood that ultimately, the Nazis failed.”

“The Nazis took away the gift of marking time, celebrating birthdays, holidays and praying, which takes away the ability to take stock of who you are. Now, we are in a position where we can celebrate,” she continued, “I am going home with a greater appreciation of what we have Jewishly.”