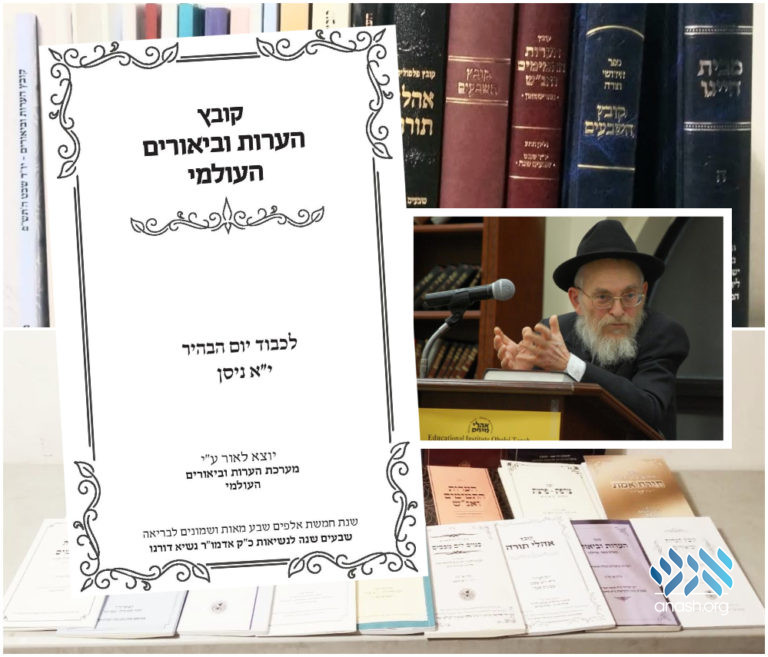 In honor of Yud Aleph Nissan, a global Koivetz has been published. In previous years, each Yeshiva published individual Koivtzim. But this year is unique. A couple of Bochurim were discussing the concept that the Rebbe mentioned many times, that since Torah is higher than time or place, it has the ability to connect people who are in different locations physically. They decided that in light of the situation that we find ourselves in, they wanted to put that concept into action. While physically spread around the world, the Bochurim united to publish their novel Heoros Ubiurim in one united Koivetz, in a tremendous show of Achdus.

The Koivetz is dedicated to beloved Rosh Yeshiva Rabbi Yisroel Friedman obm and is being released at the end of his Shiva. Renowned for his immense scholarship, the Bochurim felt that this Koivetz was the most appropriate way to remember R. Yisroel. While R. Yisroel was known for his brilliance as a master teacher, he also cared for the wellbeing of his students. He used personal funds to help pay for Bochurim’s Yom Tov clothing or other things that they needed. Most recently, he helped sponsor the Yud Shevat Koivetz Pilpulim published by the Oholei Torah Zal. It is truly befitting that the first official dedication to him is a compilation of Heoros Ubiurim by Bochurim, of whom he spent so much time teaching and whose learning he held so dear.

Special thanks to all the Bochurim from Yeshivos around the world that worked tirelessly to make this Koivetz a reality.

This Koivetz connects to the Rebbe’s Kapitel that we began saying. In Kapitel קי”ט it says
“גל עיני ואביטה נפלאות מתורתך”, referring to the Torah Chadasha that Moshiach will teach.

The Rebbe spoke many times that publishing new Torah insights prepares the world for the new Torah that will be taught with the coming of Moshiach, may it be speedily in our days.