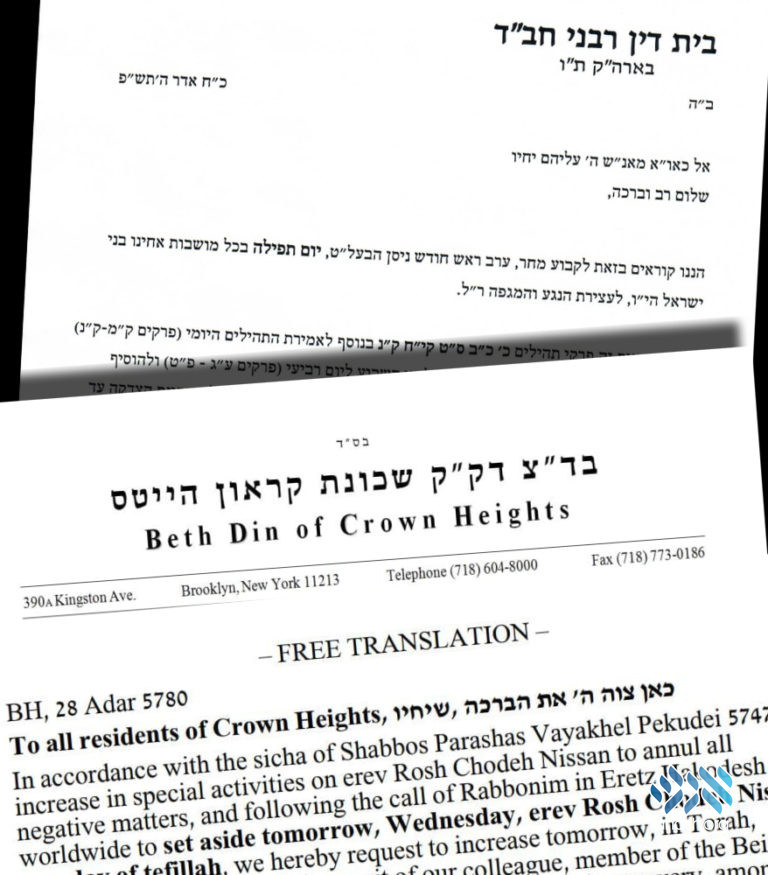 Rabbonim worldwide have called for a day of Tefillah tomorrow. Some have called for a half-day fast, Chabad Rabbonim in USA and Eretz Yisroel suggested giving tzedaka instead. The Crown Heights Beis Din requests tefillos be dedicated to Harav Yaakov Schwei.

With the number of people in critical condition from coronavirus rising, and numerous deaths worldwide, Rabbonim from around the world have proclaimed Wednesday, Erev Rosh Chodesh Nissan, as a day of tefillah.

The Crown Heights Beis Din called for residents to increase in “Torah, Tefillah and Tzedakah, in the merit of our colleague, member of the Beis Din, Harav Aaron Yaakov ben Bunya for a speedy recovery, amongst all of our fellow brethren who require a refu’ah shlaimah.”

The Chabad Beis Din in Eretz Yisroel also called for a day of tefillah, joining the call of the Rabbinic bodies ‘Moetzes Gedolei Hatorah’ of USA and of Eretz Yisroel, ‘Moetzes Chachmei Hatorah,’ Agudas Yisroel and communities around the world.

In Moscow as well, Rabbi Berel Lazar called for a day of tefillah. Rabbi Lazar suggested that healthy men of 16 and older also fast for half a day. However, the Rabbonim in Crown Heights and Eretz Yisroel are not recommending to fast, based on the current situation, and are suggesting to refraining from idle chatter in its place.

In accordance with the sicha of Shabbos Parashas Vayakhel Pekudei 5747, to increase in special activities on erev Rosh Chodeh Nissan to annul all negative matters, and following the call of Rabbonim in Eretz Hakodesh and worldwide to set aside tomorrow, Wednesday, erev Rosh Chodeh Nissan as a day of tefillah, we hereby request to increase tomorrow, in Torah, Tefillah and Tzedakah (in the merit of our colleague, member of the Beis Din, Harav Aaron Yaakov ben Bunya for a speedy recovery, amongst all of our fellow brethren who require a refu’ah shlaimah):

1. Torah: Increase in learning Torah, specifically the teachings of our Rebbe, preferably ma’amorim pertaining to Purim (including the ma’amar V’ata Tetzavah 5741) or Pesach.

2. Tefillah: Recite extra Tehillim (in addition to the daily Tehillim), specifically the Tehillim as divided according to the days of the week — Tehillim for Yom Revi’i, Chapters 73-89, and the Kapitel of the Rebbe, Chapter 118.

3. Tzedakah: Increase in Tzedakah, in a sum equivalent to the cost of three meals, or at the very least the cost of one meal. If one is unable to afford the above, he may suffice even with giving a few cents for Tzedakah. It is best that the Tzedakah be given towards activities and institutions of the Rebbe as well as Tzedakah for people who can’t afford Pesach needs (Ma’os Chitim).

4. Over here in Crown Heights we are not recommending to fast tomorrow, not even a half day fast, even for those that are healthy. This is based on medical advice as well as halachic reasons. On the contrary, it is important to increase in drinking. In place of the fast, one should try as much as practically possible throughout the day (or at least part of the day) to refrain from speaking devarim b’teilim, idle chatter, i.e. discussing matters which are not Torah or Tefillah related and are not necessary such as household matters.

May Hashem end all our suffering and bring about the ultimate Geulah with Moshiach now.

P.S. We wish to remind everyone once again to unite daily (each in his own home) at 4:00 pm to recite the Tehillim as divided according to the days of the week and to give Tzedakah. (One may do so throughout the day as well, including after Shkia if he has not done so beforehand.)