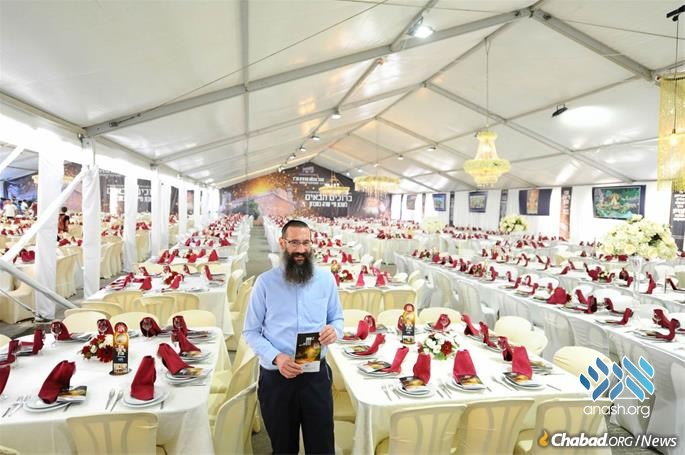 On the very site where the Jewish patriarch Abraham offered food and drink to wayfarers from an open tent in the hot desert sun— standing as the picture through the ages of unstinting hospitality—Chabad of Hebron will do its best to live up to his example when it hosts a record crowd of 6,000 at its annual Shabbat Chayei Sarah mega-gathering beginning Friday at sundown.

Held each year on the Shabbat coinciding with the Torah portion of Chayei Sarah—telling of Abraham’s purchase of the burial plot in Hebron for his deceased wife, Sarah, later housing the tombs of all of the patriarchs and matriarchs except for Rachel—the event, incorporating food, song and togetherness, has become a model of Jewish unity, solidarity and continuity.

“I am looking forward to being inspired again for another full year,” Shneur Malinas, who postponed his return flight to New York to be part of the Hebron festivities for the second consecutive year, told Chabad.org.

Recalling his experience of last year, the 21-year-old shared: “Gathered together, especially during the Friday-night meal with 3,500 people under just one of the tents, was like being with one big happy family, talking with Jews from everywhere, singing, farbrenging [soulfully sharing] and then walking around where my ancestors were and where they walked. Very inspiring.”

He said he had paid for a room last year in the neighboring community of Kiryat Arba, which was offered as a lodging option by event organizers, but in pursuit of camaraderie ended up sharing a large tent with a friend in front of the ancient edifice that houses the Me’arat Machpelah. “By morning, a few other guys had joined us. We were happy to have them.”

One of the Jewish People’s Holiest Sites

The cave is the main attraction in Hebron—one of Israel’s four holy cities—housing the sunken tombs of Adam and Chava, Avraham and Sarah, Yitzchak and Rivka, and Yaakov and Leah. Rochel is buried on the road to Bethlehem.

Estimates put the number of visitors who converged on Hebron for the special Shabbat last year at more than 30,000, with some 5,000 choosing to pay a small sum to eat and celebrate under one of three cavernous tents, collectively referred to as the “Chayei Sarah Tent.”The program, now in its fourth year, is sponsored and produced by Chabad of Hebron under the direction of Rabbi Danny and Batsheva Cohen.

Organizers said the crowd will likely exceed last year’s numbers, while the number of those choosing to be seated for meals under the tents has already exceeded last year’s count.

“We’re expecting 6,000, which is 1,000 more than last year,” said Rabbi Mordechai Hellinger, who is director of visitor activities, among other roles within the organization. “The original plan was to repeat 5,000, but because of such high demand, we were able to squeeze in another 1,000.”

In addition to steady singing, dancing, bonding, prayer and learning over the 24-hour period, the annual affair, at the request of its anonymous donor, offers lavish meals of “salmon and three types of meat, all served on the finest of dishes, with fresh flowers and chandeliers,” said Hellinger. Two hundred Chabad yeshivah students from around Israel will be on hand to help out, sharing words of Torah from the Rebbe, at the 520 tables being set up for the meals. “It’s really a proper hachnasat orchim [Hebrew for bringing in guests] that would make Abraham and Sarah proud.”

What’s more, he added, “At least according to one researcher, the site iswhere Abraham our father had his tent. There is some debate whether his tent was on our actual tent site as opposed to somewhere else in Hebron, but we definitely believe that he is in our tent.”

The Cohens have been serving the Jewish population of Hebron since 2002, building on a continuous Chabad presence in the city since the summer of 1967 in the aftermath of the Six-Day War, when it was returned to Jewish hands. It goes even further back to the time of Rebbetzin Menucha Rochel Slonim, the daughter of the Mittler Rebbe, and a beloved and revered foundation of the community for 43 years from the middle to latter 1800s.

Rabbi Cohen is quick to acknowledge that he is not the sole curator of the Jewish people historically in Hebron nor the lone producer of the trademark affair. “In fact, we are honored to have joined arms with the local Jewish community and the New York-based Hebron Fund, which initiated the concept of Shabbat Hebron some 25 years ago,” he said.

Before the grand annual event was launched by Chabad of Hebron, the historic site was, and still is, on the Shabbat of Torah portion Chayei Sarah a destination for many to what was and still is called “Shabbat Hebron.”

The event derives marked meaning from the Torah’s teaching that Abraham pitched an open-sided tent in the desert to attract guests, who he would feed, care for and teach about G‑d.

Scriptural commentary also holds that Abraham was so dedicated to being hospitable that he interrupted a conversation with G‑d to run to tend to the needs of three angels disguised as men who appeared at his tent.

One of the modern-day wayfarers, Kayla Kohn, a middle-aged British immigrant to Israel who has made the trek from northern Israel to the Hebron festivities with friends or family for the past four years, bemoaned the possibility that a sore back might keep her home this year.

What impressed her most about the experience was being in a place with so many Jews adjacent to the burial place “that Abraham, our father, bought for his beloved wife,” she said. “It is very touching.”

“And then to sit with thousands of people underneath chandeliers in giant, giant tents and dine on a three-course Shabbat meal, it’s like the redemption had arrived,” related Kohn. “Whoever has not been there should make an effort to go.”