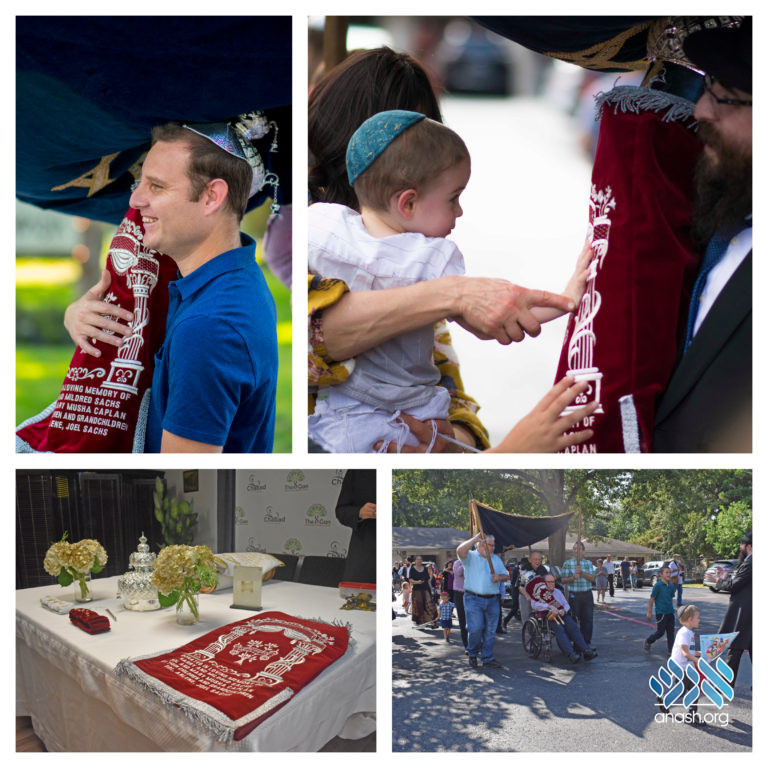 By Rachel Kaplan for the Jewish Herald Voice

It was a hot day, but that didn’t stop Jewish people in the Greater Houston area from gathering at Chabad of The Woodlands to finish and march with the shul’s brand-new Torah.

Congregants gathered around a large table where the unfinished parchment of the Torah sat, next to a quill and inkwell and a red velvet Torah cover that read, “Donated in loving memory of Harry and Mildred Sachs, Sol and Mary Musha Caplan, by their children and grandchildren, Sol, Arlene, Joel Sachs.”

It’s the first new Torah that the Chabad of The Woodlands has obtained.

“It all started with Mr. Sachs, who had a dream that he wanted to donate at torah to the Chabad,” said Rabbi Mendel Blecher.

Chabad of the Woodlands began with one Torah six years ago. The Torah was acquired from another temple, which was enabled by one of the congregants who attended Rosh Hashanah services in memory of her parents, and it remained the shul’s only Torah for many years.

Rabbi Blecher recalls “getting a workout” on holy days, as with one Torah and two readings, congregants had to roll from one part of the Torah to another and back. Then Sol Sachs told Rabbi Blecher that he wanted to donate a Torah. And, not just any Torah – one that would be finished in that very synagogue.

“In the middle of his planning for the donation, we received a Torah donated by a temple in Shreveport,” Rabbi Blecher said.

The Shreveport synagogue was looking to relocate one of their Torahs, and one of their congregants has a daughter who belongs to Chabad. It was the perfect place for it, and Chabad then had two Torahs.

So, Chabad of The Woodlands would quickly go from one Torah to three.

“It was an easy decision,” said Sol Sachs. “We’ve always wanted to do something like this for our whole family.”

Three generations of the Sachs family are acknowledged with this donation, but congregants outside the family were quick to pitch in.

The sofer (scribe) sat for more than an hour writing the final letters, words and lines donated by various members of the congregation, each dedicating their words to family and friends.

“People bought up letters and words and lines so quickly,” said Sachs. “I thought the scribe would never stop writing!”

“The day of the completion of the new Torah is a very special day, and everyone who partakes in that has a very special blessing,” said Rabbi Blecher. “When you dedicate something in memory of someone, it’s a merit for their soul in heaven. It’s a mitzvah to write a Torah and not everyone can do it, so writing a letter or a word is symbolic.”

With each congregant who came up to sign with the scribe, another piece was put into place. Rabbi Mendel explained to the congregation that each letter donated is as important as the entire Torah, for if it were removed, the Torah would not be the Torah.

The letters are like the members of the temple – each as important as the entire congregation, for if they were removed, the congregation would not be the same. Being present and donating even one letter is a wonderful mitzvah.

When the scribe finished the last letters, Rabbi Blecher announced to the congregation, “This Torah here is the newest Torah in the world!” There was an uproar of applause and singing while the ink dried.

“It’s an incredible mitzvah,” said Lisa Steck, who has been a member of Chabad for six years. “I could see how difficult having one Torah was during the High Holidays. To go from having one to having three … it’s incredible.”

The new Torah was dressed and taken outside to be paraded up and down the street. Children ran around waving flags, while everyone sang, and though they only used one street for the parade, they celebrated like the entire city was receiving the gift. After the parade, there was more singing, dancing and eating, like there is at every good Jewish party.

“This Torah impacts the community in a huge way,” said Rabbi Blecher, after the festivities ended. “We’ve only had used Torahs; for someone to donate a new Torah is so exciting for us. It will be so nice to be able to choose what Torah to read from, based on the occasion, to have some flexibility. It’s special because it’s new, finished right here in our Chabad.”