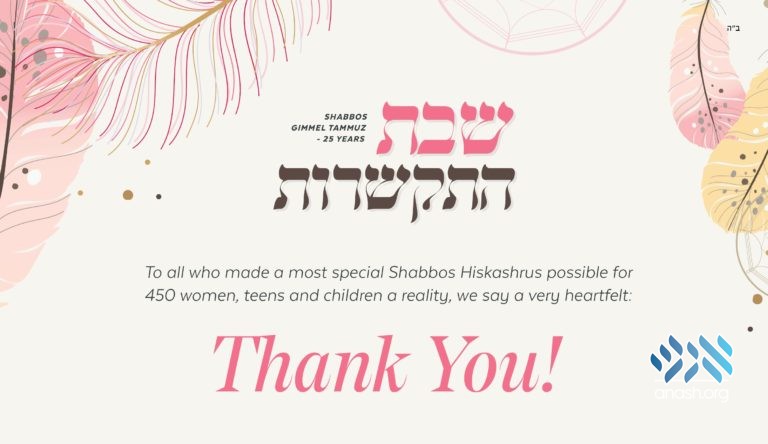 It’s been a long time in the making, a Shabbos near the Ohel for the women as well.

Thousands of men join together for “special” Shabbosim such as before Gimmel Tammuz or Yud Shvat, so why not the women? It has happened in the past, but never on such a scale. This was the first “open to the public” event, and it didn’t disappoint.

This year – being 25 years since Gimmel Tammuz – organizers finally threw down the gauntlet and said this year will be the year! Women also deserve to be inspired. Venues were secured, speakers were arranged, and programs were organized. The Hilton JFK was the place to be that Shabbos.

Friday afternoon women and children started gathering at the hotel, and there many warm reunions, with friends and family meeting – some for the first time in a long time. New friendships were formed and old ones strengthened.

After licht bentchen it was apparent that organizers overlooked nothing, even including an early seudah for families with young children, which included beautiful pesukim and songs.  Adults enjoyed an uplifting talk by Rabbi Yosef Chaim Kantor, shliach in Thailand, and a beautiful Kabbolas Shabbos inspired by a camp-style singing by the teens. Mothers were able to put children to sleep and the “hallway patrol” allowed them to come back downstairs for the farbrengen without worrying about their little ones.

A beautiful seudah was arranged for the adults, with warm greetings from Mrs. Shterna Beck and Mrs. Jody Molinari. Three simultaneous farbrengens went on until the early morning hours: Rabbi Shais Taub with the adults, Rabbi Greenberg with Bas Mitzvah group, and Mrs. Manya Lazaroff with the teens. There were lots of questions and answers and many stories.

Early Shabbos morning found the rooms transformed into early childhood and preschool classrooms, ready to greet the well-rested children. Family and friends gathered for breakfast. At 9 am the sitters and counselors welcomed the many, many children in warm embrace allowing mothers to join multiple learning opportunities, davening and discussions.
The Shabbos kiddie “camp” included many guest storytellers, interactive games and activities. To everyone’s delight, we were treated to a beautiful performance by the children.

The Shabbos day seudah was more inspiration and warmth. After the meal, there was time for some relaxation – or those wanted to, sat and farbrenged or talked or learned.

100 women and girls walked to the Ohel after Mincha and gathered in the banquet hall to be inspired by Rabbis Asher Federman, Moishe Chein, and Yossi Shemtov, while the women who didn’t make the walk enjoyed seder nigunim and farbrengens at the hotel. The camp enjoyed a puppet show stories and lots of activities. After Havdalah everyone shared warm feelings of inspiration they felt this Shabbos.

May it be a peulah nimsheches.

The feedback from attendees has been out of this world! Here’s a sampling:

Thank you for such a special Shabbos!! Everything was thought through in all the details and planned so perfectly! Such a special spirit, it felt so good being gathered with chassidim from the world on this special date.May we be zoche to give much nachas to the Rebbe and to the coming of Moshiach now!
M.G.

Hi, The Shabbos program was wonderful, well organized and a huge success. Yosher Koach! It was very well organized ensuring that the Shabbos run smoothly. The amount of thought and work that went into so many programs – babysitting to camp to teenage programs to adults, different mealtime options. It was really major.
Mrs. S.