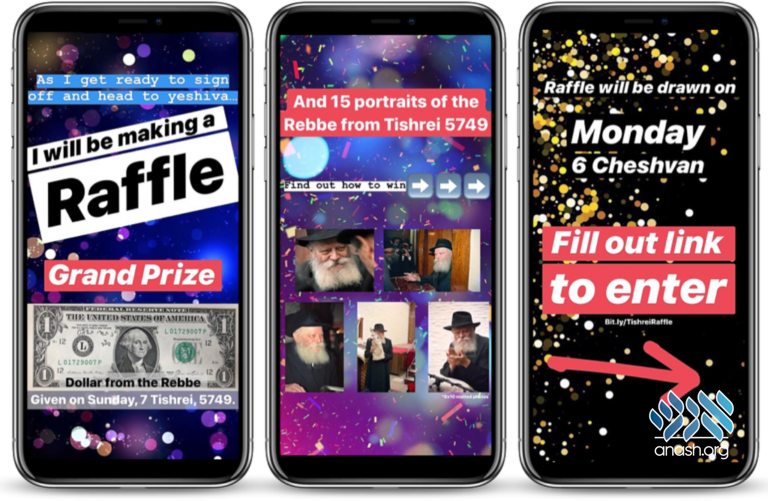 Thousands of inspired Tishrei in the Moment viewers gave their feedback and comments, as a raffle on a Rebbe dollar brought the project to a close.

Tishrei is over, and with its conclusion, JEM’s immersive Tishrei in the Moment project has reached its end. Broadcast by Sholom B, a fictional eighteen-year-old who spent the month of festivals with the Rebbe in 1988, Tishrei in the Moment took viewers on a journey through the sights, sounds, seriousness and joy of Tishrei with the Rebbe. Everything Sholom saw and absorbed was shared on social media for all to experience.

Novel, yet entirely authentic, the experience was featured on TishreiintheMoment.com, Instagram, Facebook, YouTube and WhatsApp. The series unfolded as the events occurred, offering an uplifting, front-row seat into a Tishrei at 770.

Tishrei in the Moment closed out with a raffle of a dollar Sholom “received” from the Rebbe, as well as raffles of fifteen framed photos of the Rebbe. (The dollar was received from the Rebbe on 7 Tishrei 5749 [1988] and donated to JEM for the purpose of the raffle) Thousands entered the raffle, many taking the opportunity to comment on or leave some feedback about the project. A testament to the project’s success, close to 2,000 people took from their time to describe what Tishrei in the Moment meant to them.

Malki Levine, a fifteen-year-old student from Johannesburg, related that her class was hoping to spend Tishrei in New York this year, but the trip never materialized. “Tishrei in the Moment made me feel as if I were there and part of it all. The pictures, videos and summaries made it so real and special.”

From students, like Malki, who were born after Gimmel Tammuz, to rabbis and chasidim who spent decades by the Rebbe, and to small-town shluchim looking to “plug in” for some extra inspiration, Tishrei in moment enjoyed wide appeal. “This Tishrei, I felt that I was living with the Rebbe. Not only did I feel connected as a chasid, but it empowered me to do all the Rebbe’s work,” said Mrs. Chana Teichtel, of Chabad of Nashville TN.

The grand winner of the Rebbe dollar, Joseph Lattke, also of Nashville,was actually celebrating his birthday on the day of the raffle. “It felt like a birthday present from the Rebbe,” said Joseph. “The truth is that in 1989, I was a student in New Jersey and I went past the Rebbe and received a dollar. Over the years, however, I misplaced it, and I was always upset about that. I’m excited that I once again have my own dollar of the Rebbe.”

Many people stumbled across the project on social media, and were instantly hooked. Shabbos Kestenbaum, who according to his own description,has been “recently discovering my Chabad self”, said, “the project made the Rebbe come alive for me, and made me want to deepen what I know of him.” And Ethan Brooks, a CTeen student leader who saw the project on Instagram, said the project brought with it the opportunity to “learn more about the Rebbe, something I greatly appreciate.”

Throughout Tishrei, on each platform Tishrei in the Moment was featured (TishreiInTheMoment.com, Instagram, Facebook, WhatsApp), tens of thousands flocked there to watch, learn, and be in the moment.

A recurring theme mentioned by many was their desire to see more content in this format. “I hope JEM does more projects like these in the future, bringing the Rebbe into 21st century social media,” echoed Rachel, Eric, Aron, and so many others.