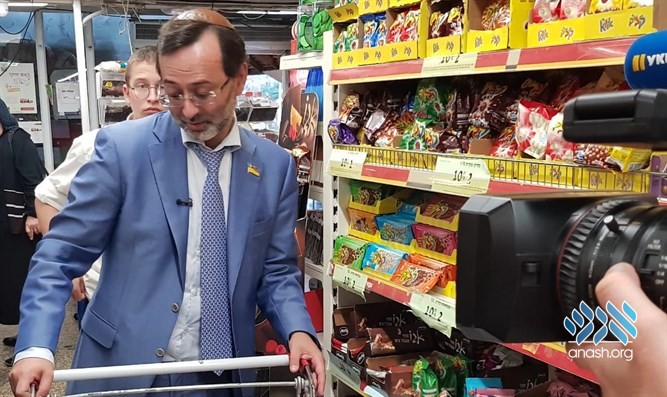 Zvi Hirsch (Georgiy) Logvinsky, a Jew who serves as a member of parliament in the Ukraine and as Vice President of the Parliamentary Assembly of the Council of Europe (PACE), visited Israel recently together with other members of the Ukrainian Parliament.

Among other important meetings, Logvinsky met with Israeli Prime Minister Binyamin Netanyahu and Knesset Speaker Yuli Edelstein (Likud) while he was in Israel.

During his visit, Logvinsky was also seen handing out chocolate bars to the children of Kfar Chabad, together with the chairman of the village committee, Rabbi Shimon Rabinowitz.

It turns out that a particularly moving story was the motivation for Logvinsky’s distribution of chocolate bars, which was published by the Kfar Chabad weekly.

Logvinsky was one of the “Chernobyl children” who were brought to Israel by Chabad nearly thirty years ago as per the Lubavitcher Rebbe’s instructions.

“When I was a child and studied in the village, I had no money,” Logvinsky said. “There were very few possibilities for making money.”

“As a child I took advantage of my free time from school and worked in all kinds of places in the village. Among them was Garelik’s esrog (citrus fruit used during the holiday of Sukkot (Tabernacles) – ed.) grove and the chicken coop. After I managed to save a few shekels, I wanted to buy something and I went to the grocery store. I saw chocolate bars there and I wanted to buy some but I realized I could only buy only one bar of chocolate with the money I earned working for one hour.”

“At that moment, I decided that my dream was to have enough money to buy a lot of chocolate bars and distribute them to other children in Kfar Chabad. During my last visit to Israel, I visited Kfar Chabad and finally fulfilled that dream. I went into Hyper Lipsker (local supermarket – ed.), filled a cart with chocolate bars of all different types and went out to distribute them to the children. It was the closing of a circle for me.”