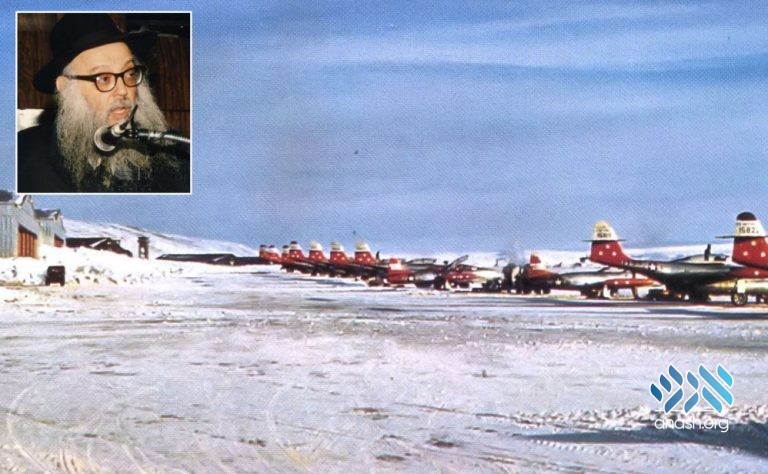 The stories were related by a Yud Beis Tammuz farbrengen in 770 – Ramat Shlomo, Yerushalaim and were transcribed and translated to English by Rabbi Mendel Moscowitz.

Special thanks to Rabbi Moscowitz for providing the stories, and to Rabbi Yossi Groner for checking over the stories.

A non-Lubavitch chassid told me that he needed to travel to Europe on business and wanted a bracha from the Rebbe. He went in Sunday night, and when he came out, he said to me: “Reb Leib, I don’t understand your Rebbe!”

“What don’t you understand?”I asked.

He said, “When I asked the Rebbe for a bracha for my trip, the Rebbe asked, ‘Where will you be for Shabbos?’ I said that I have a Thursday night flight from Europe, and I’d be arriving back in New York Friday. The Rebbe then asked: ‘Tell me, where will you be spending Shabbos?’ I replied, ‘I already told you, I’ll be back in the States Friday morning – so I’ll be here!’

“Then the Rebbe repeated his question: ‘So where will you be for Shabbos?’ At this point, I was so exasperated, I just remained silent. And the Rebbe said: ‘!איך גיב דיר א ברכה אז וואו איר וועט זיין, וועט איר האבן א פרייליכן שבת’ (I give you my blessing that wherever you find yourself, you should have a joyous Shabbos.) What is the Rebbe telling me?”

I told him, “Do me a favor, call me after Shabbos.” When he got back, he told me the following.

“Thursday night, after the plane departed, something went wrong and the pilot was forced to make an emergency landing in Greenland. Friday, at 2:00 P.M., the pilot announced that everything was in order, and the plane would be departing shortly. I asked the pilot what time the plane would be arriving in New York; the time he gave coincided with an hour after shkia. I told him I can’t travel.

“There I was, stranded at the Kangerlussuaq International Airport, totally unprepared for Shabbos. I didn’t know what on earth to do, so I decided to take a stroll around the airport. Suddenly I noticed a door that said ‘No entry’; of course, I entered, and who did I see? A Jew with a beard, sleeping in a chair.

“As they say, צרת רבים חצי נחמה (a tzara shared is half the comfort). So I woke him up.

“‘What are you doing here?’ he asked me. ‘What are you doing here?’ I asked. He responded, ‘I am a Shliach of the Rebbe. The Rebbe sent me here because there is an army base here in Greenland. There is a large number of soldiers here who the Rebbe wants me to help, inspire and motivate to lead deeper and more fulfilled Jewish lives. And what, may I ask, brings you to Greenland?’

“I explained to him my predicament, that I was left stranded here for Shabbos. ‘No problem,’ he said. ‘You’re welcome to stay with me. I have permission from the army to be here and you don’t, but don’t worry; I’ll speak to the sergeant and explain that you’re an honest fellow.’

“When I asked him what I would do about challah, wine and food, he answered that he had enough to feed an army so I shouldn’t worry. The shliach got permission from the sergeant, who said that if he was willing to vouch for me, I could stay.”

The Chossid concluded his story and said, “Never in my life have I experienced such a wonderful, freiliche Shabbos! I will never forget the inspirational talks, Divrei Torah, and amazing stories that the shliach shared with the soldiers, and the way he befriended them and uplifted their spirits. It was truly an amazing Shabbos!”

“Listen,” I told the chassid. “You could have ended up in some far out place, and you could have had a very lonely Shabbos. But the Rebbe had different plans for you. This reminds me of a story.

“When chassidim of the Chozeh of Lublin would visit him between Purim and Pesach, the Chozeh would give them a bottle of wine and a small sack of flour with which to bake Matzos for Pesach. One chassid, who was himself ‘half a Rebbe’, received the customary wine and flour, but when he got home, he stored it away and forgot about it.

Now this chassid was very poor – literally penniless. Two days before Pesach, another chassid of the chozeh visited him. When the poor chassid asked his wife to put out some refreshments for his esteemed guest, she exclaimed, “Refreshments? What refreshments? Our pantries are completely bare! We don’t even have a morsel of food for our own family.”

Her husband, remembering the package he received from the chozeh, instructed his wife to take the flour, prepare a dish with it, and offer it to the guest along with the wine. Though she wondered what they would do for Pesach, she followed her husband’s wishes.

On the morning of Erev Pesach, the chassid figured there was no use sitting around at home. There was no marror to check, no horseradish to grate, and no charoses to prepare, so he decided to head to the Beis Medrash to study. Before leaving, he instructed his wife not to accept any loans to buy the Pesach necessities. Hashem would surely help.

Later in the day, there was a knock at the door. The man standing in the doorway explained, “I am a good friend of your husband. It’s pouring outside, and my horses are stuck in the mud. May I stay here for Yom Tov?”

“That’s fine with me,” said the chassid’s wife, “but we don’t have any food for Pesach.”

“Not to worry,” the guest responded. He went back outside and returned minutes later with armloads of provisions – fish, meat, matzah, wine – a complete Seder meal.

“Where’s your husband?” the man asked. The woman replied that he was in shul. “Already?” the guest exclaimed. “Yom Tov doesn’t begin for another few hours!” She proceeded to explain that there was nothing for him to do at home, so he went to Bais Medrash. The guest decided to visit him there.

After Maariv, the chassid asked his friend, “Nu, tell me! Where are you staying for Yom Tov?”

“At your house!” he replied.

When they arrived home, the poor chassid was shocked to see a beautiful Yom Tov table laden with all of the Pesach necessities. His shock turned into anger and he said to his wife, “Didn’t I instruct you not to take a loan under any circumstances?”

“I didn’t,” came the reply. “Your friend brought it all.”

When this chassid returned to the Chozeh, the Chozeh remarked, “you made me work very hard! I sent you wine and flour, but you didn’t use it. So I arranged for it to rain so that your friend’s horses would get stuck in the mud, all so you would be provided with all of your Pesach needs…”

Rabbi Groner concluded: “When the Rebbe gives a bracha, he also orchestrates how and in what way it should happen, making sure that it is in the most optimum way possible. The Rebbe arranged it in such a way that you would have a freiliche Shabbos!”