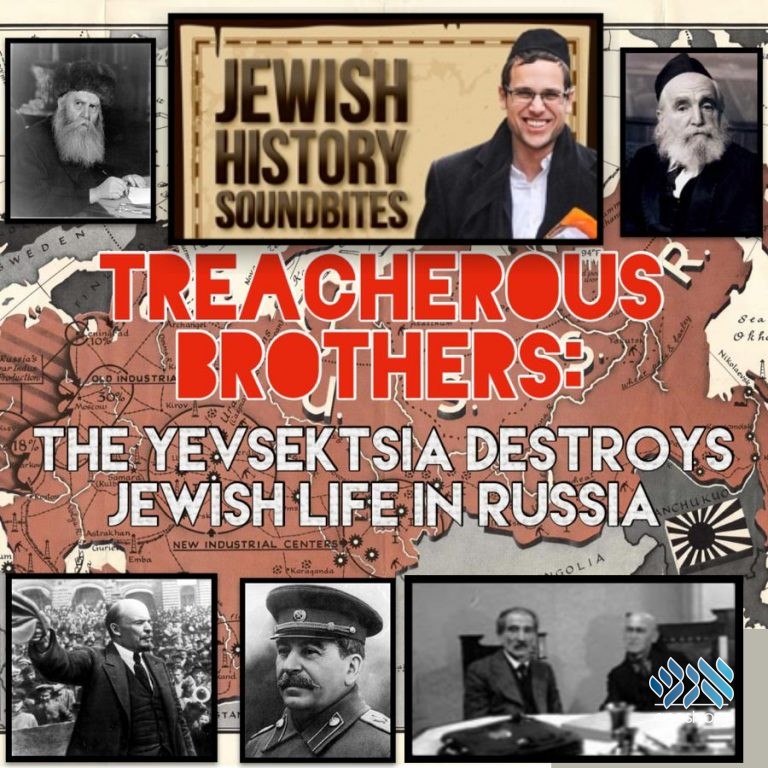 The Tisha B’Av episode of Jewish History Soundbites focuses on the story of the Yevesektsia destroying Jewish life in Russia and prosecuting the Frierdiker Rebbe and Harav Moshe Feinstein.

The Frierdiker Rebbe’s fight against the Yevesektsia was featured in the Tisha B’Av episode of Jewish History Soundbites, presented by Yehuda Geberer, a Yerushalayim-based tour guide, lecturer and researcher of Jewish history at Yad Vashem.

“Few stories among the many tragedies of Jewish history are as heartbreaking as the destruction of Jewish life in Russia by the Yevsektsia,” he says.

“While the majority of these occurrences were perpetrated from enemies on the outside, the Yevsektsia was an entirely Jewish organization. It’s a story of Jews waging war on traditional Jewish life.

“Following the Bolshevik Revolution of 1917, the Yevsektsia was established as a Jewish section of the Communist party, with the mandate to galvanize the Jewish workers in support of the Revolution and communism. At their own initiative, these primarily young Jewish revolutionaries extended their mandate to suppress all that was perceived to be counter revolutionary activity.

“The Kehillas, Cheders, Yeshivas, Shuls, Rabbinical leadership, Zionism, culture, Hebrew language, Jewish political parties and any other vestige of Jewish life was brutally suppressed and wiped out. By 1929 they were disbanded, but the damage was done. Once the world center of world Jewry, Russian Jewish traditional life was obliterated. It’s 3 million Jews stuck behind the Iron Curtain.”