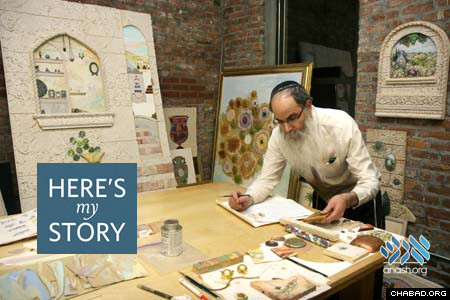 Chassidic artist Michoel Muchnik tells of the Rebbe’s advice regarding his artwork and exhibitions throughout the years.

Mr. Michoel Muchnik is a Jewish artist and illustrator of children’s books whose present focus is on developing bas-reliefs and murals. His works have been exhibited at the Brooklyn Museum of Art and other venues in the United States and abroad. He was interviewed by JEM’s My Encounter Team in September of 2015

As a young adult pursuing an art degree at the Rhode Island School of Design, I got caught up in the culture of the Sixties. It was not until I dropped out of school and got introduced to Chabad that things started to change for me. This happened in 1972 when I was twenty.

At a certain point after I enrolled in Tiferes Bachurim, the Chabad yeshivah in Morristown, New Jersey, an opportunity came up for me and some of my fellow students to have a private audience with the Rebbe. We prepared by increasing our Torah studies, and we went in one by one. I recall being very anxious and not knowing what to expect once I crossed the threshold into the Rebbe’s study. It is hard for me to describe what I felt because it seemed to me like a different reality. And I thought, “I have to take this spiritual feeling and somehow incorporate it into my art.”

As I was standing near the entrance to the room, not sure what to do next, the Rebbe said, “Come closer.” So I walked right up to the Rebbe’s desk and handed him the letter I had written listing my questions, and I also put on his desk three small samples of my art because I wanted him to advise me what I should do with my artistic talent. I thought that perhaps I should become a scribe as I was good at Hebrew calligraphy, and I believed that if I were to be religious this was probably a more suitable profession than becoming a painter.

But the Rebbe had another idea. He said that I should consider doing illuminated marriage contracts, ketubot, which have been the subject of Jewish art for many centuries. I asked him if I might also illustrate children’s books and the Rebbe approved of that, as long as it didn’t interfere with my study schedule at the yeshivah. By this point I was so excited that he was giving me the green light to express my talent, that I actually exclaimed Baruch Hashem (thank G-d) out loud three times.

When it came time for me to leave and I was backing out of the door, the Rebbe called me back and asked about the art samples I had forgotten on his desk, “Are these for me?”

“If you would like them…” I answered, somewhat flustered.

He picked up each one and then selected a small watercolor of a winter scene in Russia, depicting a little synagogue with a Star of David on top and a crescent moon in the background. When he said, “I’ll keep this one,” I was so happy.

Again I started to leave, but again the Rebbe called me back. “Is this an original?” he asked. I replied that it was, to which the Rebbe responded, “I can’t keep an original, but when you make a print please send one to me.”

The painting selected by the Rebbe

Of course, I made a print and sent it to the Rebbe. And, thereafter, whenever I made limited edition prints of my work, I always sent one to the Rebbe.

Now, I did not expect it, but the Rebbe proved quite the art critic. I recall sending him my first lithograph, which is a complicated form of fine art requiring a lot of handwork before the printing. It is called “The Village of the Menchniks” and it depicts tiny Jewish people going about their lives – it’s a very busy picture with a myriad of things going on.

After I delivered it, I got a response from the Rebbe that “if it can be done easily” a few things should be changed. The Rebbe noticed that I had painted items which are related to each of the three spiritual pillars upon which, according to the Mishnah, the world stands. He requested that I move these items to their appropriate places.

The Rebbe had noticed that, in the bottom left corner, there is a little house labeled “Free Loan Fund” and another labeled “Hospitality Hotel,” and he asked that their location be moved to the right since these are deeds of kindness, the pillar which corresponds to the right. The Rebbe wanted the synagogue moved to the left, as the synagogue symbolizes divine service, the second pillar which belongs on the left. And he suggested the yeshivah and the Torah books be placed in the center. There was also a factory manufacturing dreidels, but the Rebbe requested that it manufacture Shabbat candles instead.

The prints had already been made and I could not change them after the fact, but I learned from this – afterwards, I would always send the Rebbe a proof so any changes that he recommended could still be executed. And, of course, I incorporated what he had suggested in future paintings.

Another work of mine which the Rebbe commented on was one called “The Great Mitzvah Fair.” It depicted a Jewish amusement park with rides made up of mitzvot. The Rebbe noted that the mitzvah of Sukkot – the lulav and etrog – were missing. Later, when I published a book with that title, I made sure that there was an illustration of a booth at the fair devoted to the lulav and etrog, and to another of the Rebbe’s suggestions: a gift shop called “Ahavat Yisrael – Love of a Fellow Jew.” This, of course, made total sense because a gift is a way of expressing love.

As my artwork became a bit better known, I was invited to exhibit it, and at one point I had shows in eight different Chabad Houses across California. I was very new at this and I badly miscalculated how much I would sell so that by the third stop I had sold almost everything. What was I going to exhibit on the fourth stop, never mind those after that? In a panic, I tried to paint some new things at night, but that didn’t work out too well, and I had to borrow back the works I had already sold just to have something to show. By the end of the tour, I was a nervous wreck and I went home sick from the whole experience.

When I wrote to the Rebbe for advice on how to avoid such anxiety in the future, he responded that I should meditate on the concept of Divine Providence and that I should place on display at my exhibitions the following: a charity box, the Five Books of Moses, the Book of Psalms, and a prayer book. He also said that before every show, I should give to charity “eighteen times eighteen cents” (as the number eighteen symbolizes life).

I did just that, and the Rebbe’s advice saved me many times. Often exhibitions – especially in international venues, where one has to deal with customs, taxes, import laws and corrupt officials – can be very stressful. Then there are exhibitions where hardly anybody shows up, or those where lots of people show up but nobody buys anything. But no matter what happens, meditating on Divine Providence and donating to charity even before making a profit helps to buttress my faith that G-d is watching and taking care of my livelihood. And that displaces a lot of the anxiety and fills me with more peace.

For a PDF version of this interview click here.