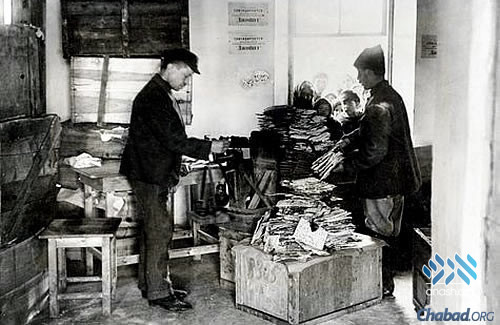 Motzei Shabbos Story: In the Soviet Union, even getting a piece of matzah for the Seder was fraught with danger. An operation to bake matzos for Odesa Jews almost ended in disaster until a humorous incident saved the day.

Sitting at our family’s Seder table in Israel, it’s hard to imagine what Passover was like when my parents were growing up in the Soviet Union, where even getting a piece of matzah for the Seder was fraught with danger.

Papa would know. After all, it almost cost him his future.

It happened in the late 1960s, when living as a Jew in Russia meant living through a nightmare. Religious or not, it didn’t matter. Thousands of Jewish families, unable to flee Russia but desperate to escape Khrushchev’s oppression of religion, changed their surnames to something more socially accepted. But nothing helped. As the saying went, “It’s your face that gets slapped, not your passport.” This is how my father grew up.

One year, when Papa was around 12 years old, a little while before Pesach, his good friend, Rafik, son of an observant father, asked my father whether he would be interested in smuggling matzahs to Jewish families in their city. Even in those times, many Jews in Odessa were looking forward to celebrating the festival of freedom with matzahs. The operation entailed risks that were high and terrifyingly real. If my father was caught, his parents could lose their jobs (which didn’t come by easily in the first place). He could be relocated to a “state-approved environment,” which meant an orphanage. Nevertheless, his inexplicable Jewish pride caused my father to agree.

The deliveries had to be made close to dusk, when the darkening sky shrouded the city in shadows. Streets and alleys turned lawless at night, forcing the boys to make their deliveries in pairs or groups of three. The matzahs came from a bakery that operated during the dead of night. It was a large, simple room, shelves of supplies lining its walls, with a small oven burning in the corner. In the middle stood a dough roller that flattened lumpy dough into thin matzahs. Two elderly religious bakers, both who lived other lives during the day, bustled around the room, feeding the dough roller and sliding limp matzahs into the oven, two at a time. They also supervised the happenings at the bakery, ensuring that everything was 100 percent kosher for Passover. An old man everyone called Dadya Zuni headed the operation and sorted the matzahs according to the orders. Aside from a select few, nobody knew where the matzahs came from. They just ate them gratefully, hoping that the day would come when they would be free to celebrate Passover openly.

Dadya Zunia kept the names of his customers on a long list, and every night he would consult it to see who had yet to receive matzahs. The boys were handed pillowcases (the soft material prevented breakage) lined with the precious matzahs and sent outside. The addresses they were to deliver to were recorded in their minds only; it was too dangerous to leave a paper trail.

Within three hours, 30 to 40 homes were to be visited. After each delivery, the boys would collect nominal payments. Occasionally, they would receive tips, and depending on the amount, they either kept it or brought it back with them to the bakery.

One night, it happened. The delivery boys were in the bakery, ready to head outside, waiting for Dadya Zunia to provide further instructions when a sudden knock on the door shattered the quiet rhythm of the bakery. One could have heard a pin drop as all eyes in the room met each other. Dadya Zunia ran to one of the bakers.

“Are you expecting someone?” he whispered. “Is anyone supposed to come?”

The baker shook his head. Dadya Zunia turned to the other one. “You?”

The second baker looked terrified. The answer was immediately clear.

At that moment, the knock turned into a door-rattling bang. “Open up! This is the KGB!” shouted a muffled voice. The door shuddered in its frame again as renewed blows attempted to wrench an answer from its wooden planks.

Wordlessly, Dadya Zunia beckoned to the boys to hide among the sacks of flour. Seeing that they were well-hidden, Dadya Zunia readied himself and unlocked the door. The police burst inside and began to turn the place upside-down.

My father crouched in the darkness with his friends, listening to the scrapes, thuds and the ceaseless barks of questions at Dadya Zunia as the police searched the bakery. Time stretched agonizingly slow behind the sacks of flour, the small group of children forcing their breaths into near silence, until the bare light bulb suddenly clicked on and silenced even that. Determined footsteps made their way to the center of the room and stopped.

“Well, well, well,” hissed the KGB officer and strode over to the sacks of flour, where guilty faces looked up.

The story my father and his friends invented was that they were children of Dadya Zunia, spending their time in his bakery. But the KGB didn’t buy it. The place had been under surveillance for a while now. They had seen small groups of children running out with pillowcases full of matzahs and returning with an empty pillowcase or no pillowcases at all.

Dadya Zunia, the two bakers and the delivery boys were herded into vans and sped down the dark cobblestoned streets. The officers also loaded the vans with sacks of flour and bakery equipment, along with six suitcases of freshly baked matzahs. Prison was the next destination and perhaps, for some, the final one as well.

Like nearly all government buildings in Soviet Russia, the Odessa KGB headquarters was a gray monolith designed to exude deadly authority, ironically occupying one of the corners on Ulitza Evreyskaya, “Jewish Street.” The “black crows” (as the KGB vans were known) swung into a towering open gate and came to a halt. Officers sprang out and began separating the group. My father and his friends were jostled into one direction and eventually locked inside a room, far away from the adults.

Back at home, my grandparents were worried about their son’s whereabouts. It was getting late, and he still hadn’t shown up. Unable to bear it any longer, my grandfather began looking for my father in the streets. Eventually, one can call it miraculous, my grandfather showed up at the KGB station, where he was shocked to discover that his son had been arrested.

If my father had been indicted, my grandfather’s job as a workshop manager and my grandmother’s respected position at a winery would have all been lost. They would live in poverty for the rest of their lives.

Thinking quickly, my grandfather called his good friend, Manovich, a Jewish lawyer who was known to be helpful in situations like this. Losing no time, as the trial was already set for tomorrow, Manovich arrived at KGB headquarters and was allowed inside to see his client. Many of the officers were friendly with Manovich and listened carefully as he spoke. Matzahs weren’t simple biscuits, Manovich explained through clouds of cigarette smoke. It was a holy bread, baked by holy men utilizing a hallowed process. Whoever ate it was imbued with health, wealth, a strong family, and most importantly, immortality. Yes. The eater also gained the ability to live forever. In fact (and Manovich lingered on this detail), family members were able to indulge in this holy food as well. Manovich played well on the attention he was receiving, spinning such a masterful yarn that by the time he finished, not a doubt remained in anyone’s mind about the significance of the six suitcases locked inside the building.

The officers didn’t hesitate. As soon as Manovich left, they invited anyone they deemed important enough. Family and friends came for samples of the mysterious Jewish bread. It didn’t take long for all of the whole matzahs to disappear. Only cracked remains were left on the bottom of the suitcases. (Apparently, in their hunt for transcendence, they came to believe that a whole matzah provided more blessing than a broken one.)

My father didn’t know it at the time, but he was later told that Dadya Zunia had stayed up the entire night in his cell reciting chapters of Psalms, praying for their safe release.

The next day, my father and his friends were escorted to the courtroom, where the air was thick with trepidation. Dadya Zunia and the two bakers sat in one of the rows. The judge cleared his throat and requested that the evidence be brought inside for review. Piece by piece, the matzah-bakery equipment was brought forward to the front of the silent courtroom. The judge’s brow furrowed with every new item, deepening the serious expression on his face. The six suitcases full of crumbs were finally presented, and the judge could take it no longer. He expected to see hard evidence of crime—a religious crime, according to the papers lying in front of him. Instead, he was made to stare at bakery equipment and the remnants of some crackers littering empty suitcases. His schedule was too busy for this absurdity. The judge picked up his gavel, gave a sharp rap and impatiently waited for everyone’s attention.

“All charges cleared. I have not been presented an adequate reason for the arrest.” The judge peered at the group sitting on the hard wooden benches. “You’re free to go. I have no time for this.”

And with that, the case was dismissed.

That year in Odessa, at the close of the 1960s, the redemption of the Exodus—and the eternal freeing of the Jewish spirit—was undoubtedly felt by these brave matzah-bakers.

Dedicated in memory of my grandparents, Rita bat Chaim and Baruch ben Shimon.