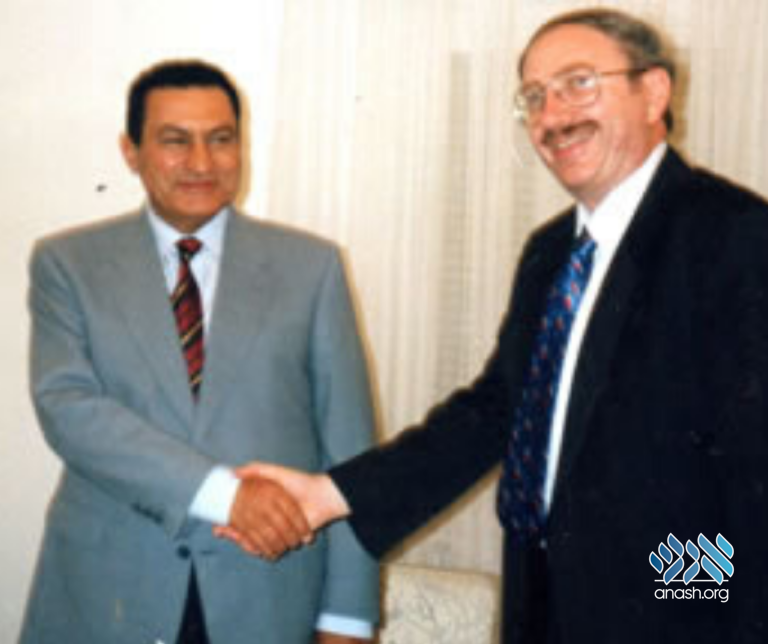 In the 1980s, while part of a delegation visiting Egypt, Israeli journalist Yisroel Katzover was called into the private study of Egyptian President Hosni Mubarak, who died earlier today. The President then asked him a question about the Rebbe that startled him.

Yisroel Katzover was a senior Israeli journalist who covered the IDF’s and Israeli security issues for several decades for Hamodia, Algemeiner Journal, Kol Yisrael and other media outlets.

In March 2010, he was interviewed by JEM and his interview was featured in Faithful and Fortified, Volume II: Israel’s Journalists.

Yisroel Katzover is a senior Israeli journalist who covered the Israeli military for several decades for Hamodia, Algemeiner Journal, Kol Yisrael radio and other media outlets. He was interviewed by JEM at his home in Jerusalem in March 2010:

I visited Egypt eleven times. On many of those occasions, when I accompanied Israel’s prime minister or defense minister, I also met with Egyptian president Hosni Mubarak. He would take the journalists into a side room, where he would sit with us and have very interesting, open conversations with us.

I remember one particular meeting. We were five or six journalists. For some reason, Mubarak rushed the conversation and brought it to an end. Then he called me over and said, “Please come into my office.”

I followed him in, and he said: “I know what you write. I know your views. And I have a question for you. Can you tell me what the Lubavitcher Rebbe wants from me?”

I was shocked. I said to him, “To what is the President referring?”

He said, “The Rebbe speaks out against our agreements with Israel. He sees us as an ongoing threat. Why does he do this? What does he have against me?”

I responded: “I am certain that the next time the President will visit the United States, the Rebbe will be happy to meet with you and explain his views to you. I can only present my understanding . . .” And for a half an hour, he listened as I told him about the Rebbe—who the Rebbe was, what his approach was, what was the history of Chabad, about their work all over the world.

In my opinion, it made an impression on him. I saw confirmation of this many years later.

In 1984 the Rebbe launched a campaign for all Jews to study Mishne Torah – code of Jewish Law authored by the Rambam. In 1985, when it came time to celebrate the completion of the first study cycle, the organizers of the event in Israel decided to hold the ceremony in the old synagogue of the Rambam in Cairo.

They were concerned that in light of the Rebbe’s statements concerning Egypt, permission would not be granted. So I was asked to help.

I spoke with the Egyptian ambassador to Israel, and I said, “The Chabad chassidim want to arrange an event in Cairo.” I explained that they wanted to celebrate the study of Maimonides’ book. That there was nothing political about it, only scholarship.

The ambassador agreed to pass on my request.

I said to him, “I don’t know who you plan to talk to, but I request that you bring this matter all the way to the top. I have no doubt that your president will authorize it.”

He promised to do so.

To this day I don’t know if he actually did bring it to Mubarak, but it didn’t take long to receive a response. Two days later he came back and said, “I went to the top. There’s no problem for Chabad to come and hold the event in Cairo.”

The ceremony took place, and the Egyptians treated the chassidim very well.

This just goes to show that even in Egypt, the Rebbe’s standing was strong, and that they took his opinion into account. The same applied to other Arab countries, and many other places in the world.