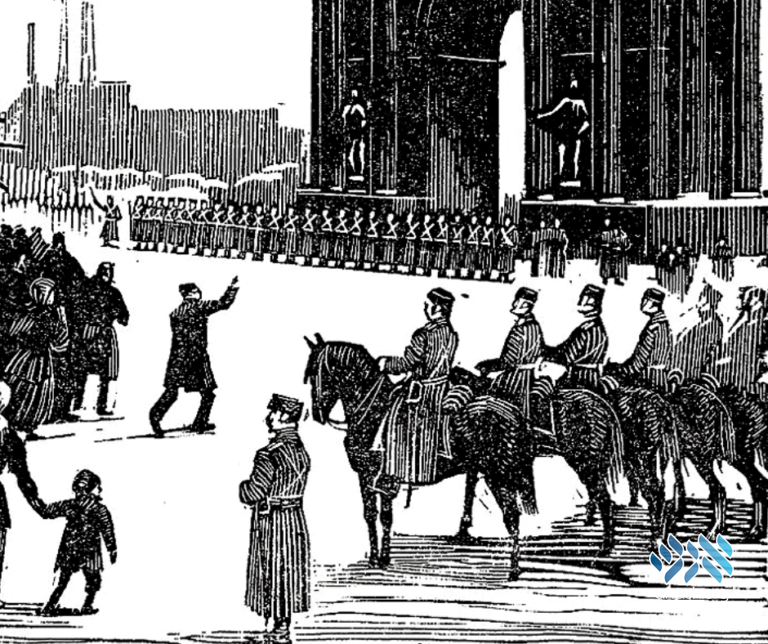 When Mr. Itkin’s life was in danger after starting up with a local gang, the Rebbe Rashab gave him unexpected advice.

During the Polish Revolution, which began in 1905, peasants and workers revolted against the government and aristocracy, demanding political freedom and improvements in their living conditions. The government resisted, and an armed struggle ensued between the army and a loose coalition of ruthless gangs.

The gangs supported their fight through robbery and extortion: They would show up at the home of a well-to-do citizen and demand a certain sum by a specific date, under threat of death. Most complied, and respectable Poles lived in constant fear of receiving one of these “visits.”

One day, a group of thugs arrived at the home of Dovid Itkin, a real estate broker who served as the custodian for several apartment buildings in Warsaw. The gang read from a prepared paper that demanded the large sum of two hundred gold rubles. “Sign on it now,” they commanded. Mr. Itkin, who had a short temper, became angry, ripped up the paper, and chased them away. A short while later, one member of the group returned with a new thug, who asked, “Where is he?” His friend pointed to Mr. Itkin, who found himself looking down the barrel of a gun.

Mrs. Itkin began to wail at the top of her lungs, momentarily distracting the thugs. Mr. Itkin seized the opportunity and tackled the man with the gun. Clearly unprepared for such resistance, the two men became frightened and ran off.

Once their initial relief subsided, however, the family realized they were still in grave danger. One of Mr. Itkin’s nephews suggested that he consult the fifth Chabad Rebbe, the Rebbe Rashab, about what he should do. Mr. Itkin accordingly travelled to the town of Lubavitch and related the entire story.

“You need to meet them,” the Rebbe said, referring to the thugs, “and make peace with them.”

Mr. Itkin was baffled. The gang was not an organized group with a central office where he could schedule a meeting. The family returned to Warsaw, but Mr. Itkin could not resume his former life. He remained at home, frightened to leave his house.

One day, his wife came home and said that she had seen one of the members of the gang sitting in a nearby bar. It was decided that the couple should go meet him there. First, Mrs. Itkin approached the man, who was already half-drunk. He clearly wanted some more drinks, and Mrs. Itkin told him that she and her husband would pay for the drinks if the gang would forgive them. The man agreed, and the Itkins were left in peace thereafter.