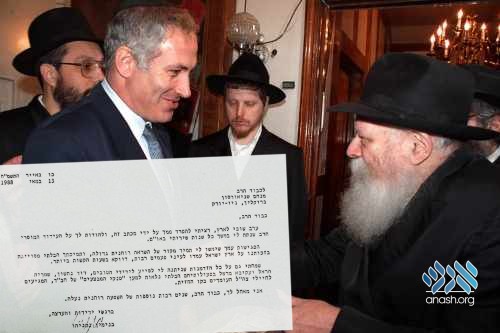 As the supreme court in Israel discusses if Bibi Netanyahu is eligible to be prime minister, a letter he wrote to the Rebbe in 1988 when leaving his UN post was publicized for the first time.

A letter penned in 1988 by then-Israeli Ambassador to the United Nations Binyamin Netanyahu to the Rebbe, in which Netanyahu thanks the Rebbe for “the great moral encouragement you have given me throughout my years of UN service,” has been revealed for the first time.

On Sunday, as a panel of 11 Israeli Supreme Court judges deliberated on Prime Minister Netanyahu’s eligibility to be tapped for an additional term as Israel’s Prime Minister while under indictment, a rare photograph of a letter Netanyahu wrote to the Lubavitcher Rebbe when he left office as Israel’s ambassador to the United Nations 32 years ago was revealed for the first time. In the letter, Netanyahu writes, “On the eve of my return to Israel, I wanted to say goodbye to you with this letter and thank you for the great moral encouragement you have given me throughout my years of UN service.”

“[My] meetings with you have always served as a source of great spiritual inspiration, and I have recalled your unreserved support for our right to the Land of Israel on numerous occasions, especially during [my] most difficult hours,” added Netanyahu.

He continued, “I was also delighted to have been given the opportunity to help my good friends, David Nachshon, Shmarya Harel and Akiva Marshall in their tireless activities on behalf for Chabad Mitzvah Tanks, which reach IDF personnel [stranded] on the front line. I wish you, exalted Rabbi, many more years of spiritual influence.”