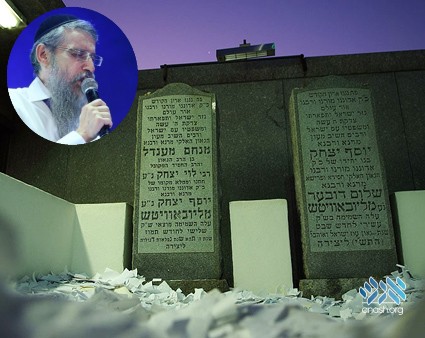 During a talk to students of Yeshivas Mercaz Harav, Rosh Yeshiva Rabbi Yaakov Shapira, shared a miraculous Rebbe story involving one of his students and singer Avraham Fried.

During a recent shiur to his students over Zoom, Rabbi Yaakov Shapira, Rosh Yeshiva of Yeshivas Mercaz Harav in Yerushalayim, shared this amazing new miracle story of the Rebbe:

About a year ago, Yeshivas Mercaz Harav held a celebration marking Yom Yerushalayim, and singer Avraham Fried was invited to perform at the event.

After the performance, a young man approached Avraham Fried and requested a personal favor: When the singer returned to New York, could he go to the Ohel and request a bracha for him that he should be blessed with children?

Avraham Fried was very moved by the request and promised that when he would land in New York, he would go to the Ohel directly from the airport and request a bracha on this young man’s behalf.

Now, almost a year later, this young man and his wife are expecting a child in the coming days bez”H.

Rabbi Shapira emphasized that he had clarified the details again before deciding to publicize it.

“The story is particularly relevant these days, as we approach the special day of Lag B’Omer, a day related to yeshuos for children,” the Rosh Yeshiva concluded.