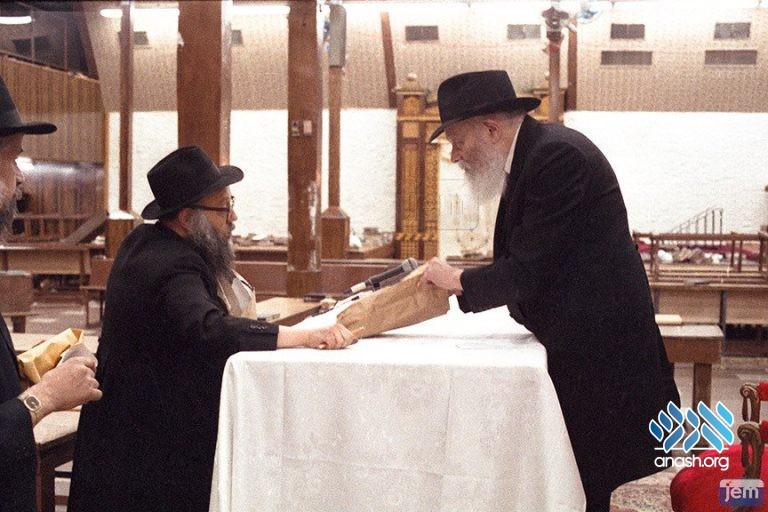 The sicha the Rebbe delivered on 28 Nissan 5751 shocked the Chassidim. Two weeks later the Rebbe asked Rabbi Leibel Groner a”h what the practical outcome of the sicha had been.

On Chof-Ches Nissan 5751 (1991), after Maariv, the Rebbe unexpectedly delivered a sicha on the uniqueness of the day, and the lessons we may take from it. Suddenly the Rebbe’s tone rose and he began to speak with pain:

“How is it that when many Yidden gather together, they do not do something to bring Moshiach, and they find it an option to remain in golus?! Even the shouting of Ad Mosai! is done because they are told to… Had they pleaded for Moshiach with true feeling, he would have already come! What else can I do to inspire others to want and bring Moshiach? – for after all that has been done, we are still in galus! Moreover, every individual is exiled in his personal galus in avodas HaShem. I am giving it over to you: do all you can to bring Moshiach now!”

Some chassidim understood that there was something new and different that the Rebbe expected them to do. They met and discussed various ideas, but could not reach a conclusion.

The following Shabbos, the Rebbe clarified what avoda was to be done to bring Moshiach: “Simply to increase one’s efforts in Torah and mitzvos – in the study of Torah, nigleh and pnimiyus haTorah, and the fulfillment of mitzvos behiddur. In addition, one should spread Torah and Yiddishkeit to others, especially the teachings of Chassidus. This should all be done with an intense yearning for the geula.”

About two weeks later the Rebbe asked the mazkir, Rabbi Groner, what was happening in connection with what he had spoken about on Chof-Ches Nissan. Rabbi Groner responded that after the sicha, some chassidim had tried to figure it out, and they were still “breaking their heads” trying to work it out.

The Rebbe told him, “I don’t understand why they need to ‘break their heads,’ when I stated clearly what needs to be done.”

The Rebbe then counted with his fingers: “They should increase their efforts in learning Torah – nigleh and Chassidus – and in fulfilling mitzvos behiddur, and they should work harder on ahavas Yisroel and on the spreading of Chassidus.”

He then told Rabbi Groner to relay this to the chassidim, and to include the following message: “There is no need to ‘break one’s head’; I have spelled out what needs to be done.”

A few days later, the Rebbe received a letter from Australia with a similar question. He asked for a copy of the printed sicha of the previous Shabbos and, finding the passage that spoke about doing more in the area of Torah and mitzvos and so on, he instructed Rabbi Groner to pass this message on to them.

The article originally appeared in Hebrew in Kfar Chabad Magazine, Gimmel Tammuz 5770, and was translated by Anash.org staff.