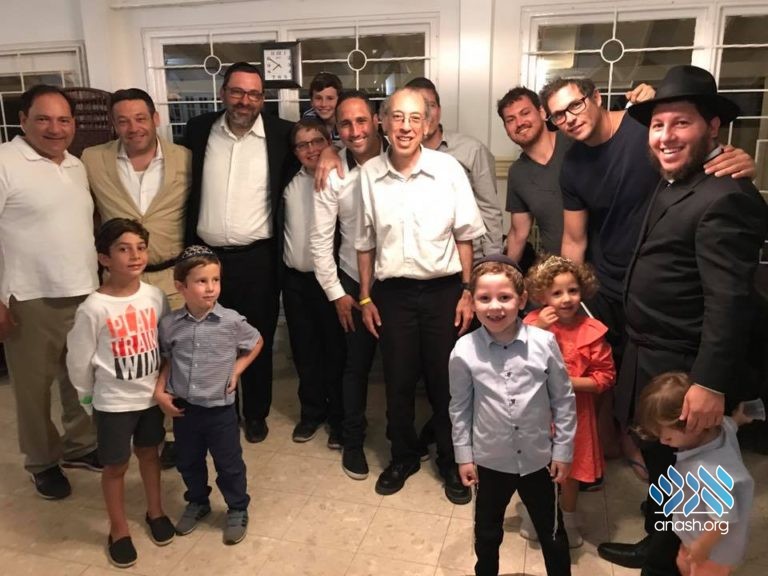 Aruba has cool sandy beaches, sparkling waters, windswept vistas, luxurious hotels … and a full line of Jewish services, programs and amenities. Much of the current renaissance of Jewish life on this Caribbean island—only 19 miles long and around that far from the tip of Venezuela—is to the credit of Rabbi Ahron and Chaya Blasberg, who founded the ChabadJewish Center of Aruba in 2013.

In this interview, the couple—who grew up in Jerusalem and Leeds, England, respectively—share the delights and the difficulties of fostering Jewish life in a place where the weather is almost always nice and the locals are welcoming.

Q: To start with, what’s the Jewish community of Aruba like? Can you describe it

A: Aruba is a tiny island, a former Dutch colony, which is still a constituent country of the Kingdom of the Netherlands.

The official languages are Dutch and Papiamento, a local blend of Portuguese, West African languages, Dutch, and Spanish. Most people also speak English, with which they communicate with tourists.

The Jewish community here is quite small but with a long, proud history. The first known Jewish settlement goes back to 1754, when a Portuguese-Jewish worker for the Dutch West Indies Company named Moses Solomon Levie Maduro, arrived here with his family.

There is still an old Jewish cemetery here with fewer than a dozen graves, some of which date back to the early 19th century. It is not believed that the Jewish community of the 1800s was ever large enough to build a synagogue, and they eventually faded away.

During the Holocaust, there was an influx of Jewish people here, and they eventually organized a community center and then a synagogue. Over time, many of the children of those people have moved away, but others have come to replace them, making for a very diverse Jewish community.

Q: Who are the people you serve?

A: As far as we know, there are some 120 Jewish people who live here full-time. In addition, many people own second homes and come for several months each winter, and thousands of Jewish timeshare owners come for a few weeks—or days—every year to stay in the timeshares they own (Aruba is ranked the No. 1 island in the Carribean for repeat visitors, thanks to these timeshares).

At a typical Chabad event, we might host people from Israel, Brazil, the United States, France and just about anywhere else. During the high season, which runs from December to April, we have thousands more coming from all over, mostly from the American Northeast and Canada.

And then there are the people who come by on the cruise ships. They may come here for just a few hours, but we try to be there for them as well to create a positive interaction.

Celebrating Havdalah with family and friends.

Q: How did you end up moving to Aruba of all places?

A: We had been married for several years and were looking for a place to become shluchim (“emissaries”) of the Rebbe—Rabbi Menachem M. Schneerson, of righteous memory. We were looking at a number of places and had not settled on one that would be right for us. Then a relative, Elchonon Shagalow, went to Aruba for business and told us that the island was ripe for a Chabad presence.

We got in touch with Rabbi Moshe Kotlarsky, vice chairman of Merkos L’Inyonei Chinuch, the educational arm of the Chabad-Lubavitch movement, and Rabbi Mendy Zarchi, who oversees the Chabad centers in the Carribean. We decided to come for a visit, and were encouraged to found our Chabad Center by the then Prime Minister of Aruba, Mike Eman, who is Jewish. He grew up here and knew that there was potential here—and he was right.

The truth is that although we founded the first permanent Chabad center here, Chabad has been involved here for decades.

The Rebbe founded the Merkos Shlichus Program, which dispatches hundreds of rabbinical students to communities all over the world during summer break and for Jewish holidays. Every summer, pairs of students would fly from island to island, bringing mezuzahs, Jewish literature and a connection to the outside Jewish world.

What we are doing now is a continuation of what the Rebbe began so many years ago.

Q: Is there kosher food in Aruba?

A: Almost everything here is imported, mostly from the United States. So standard grocery-store items are often kosher certified, just like in America. But wine, meat and dairy were very limited when we came, almost impossible to find.

Now, thank G‑d, we have an arrangement with a wholesaler in Miami. There is a ship that comes on a weekly basis, so we order whatever we need, and we have it a few days later. Of course, we have large freezers to store supplies for ourselves and for the other kosher-keeping families on the island.

We have a small kosher catering outfit in our Chabad House, which supplies meals to hotel guests and anyone else who wishes to keep kosher.

On Shabbat and Jewish holidays, we host large meals at Chabad where both locals and tourists enjoy kosher food, good company and an all-around nice experience.

A funny thing often happens at our table. Two people will begin talking and discover that they live just blocks away from each other in Philadelphia, New York, Montreal. For whatever reason, they needed to travel hundreds of miles to find a friend who had been living next door to them for decades.

Wrapping tefillin on the beach

A: Thank G‑d, we recently purchased a spacious and welcoming facility. It has a synagogue, where we have daily services during the high season, and Shabbat and holiday services year-round. It has room for our regular classes, holiday events, everything we do. That’s also where we have our Hebrew school, which we are very proud of.

We also have a very active Jewish Women’s Circle, which holds events in private homes.

Our most active time of the year is Chanukah, which comes during the height of the tourist season. We have giant menorahlightings and concerts in various hotels and other central locations. We meet thousands of visitors and locals; everyone has a blast.

Q: Living in Aruba sounds like a dream come true. What are some of the challenges?

A: Locals here talk about island fever—the feeling of being stuck on a small island with nowhere to go. And it’s true in a sense. If we wanted to get in the car and drive for an hour, we couldn’t; Aruba is just 19 miles long and six miles wide.

In a more immediate sense, there is the challenge of not having a Jewish school for our four children, the oldest of whom is now 8. We teach them at home or at the Chabad House, and we are both very involved in their care. People take it for granted that they can send their kids off to school in the morning and then go to work. We are always balancing our communal work with our family duties.

We also sometimes feel the pressure of knowing that so much of the island’s Judaism depends on us. Our work here is an honor and a pleasure, but the fact is that if we want kosher food, we are the ones to import it. If there will be a Pesach seder, it’s because we will arrange it. We have a wonderful circle of very supportive community members and friends, but we are the rabbi and rebbetzin, and the responsibility is ours.

Of course, these are all real blessings. We have a lovely family and a fantastic community we love dearly, so there’s nothing to complain about.

Q: What keeps you motivated day in and day out?

A: The people we meet. Here is one example. A couple had just gotten off a cruise ship. It was Chanukah, and we had menorahs with us. They saw us giving a menorah to someone, and they stopped to take a picture. We started talking and they told us they were Jewish, originally from the Soviet Union.

We asked the gentleman if he would put on tefillin. He said that it was too late for him. His grandchildren were getting a solid Jewish education in Hebrew school in America. But he had already been robbed of his Jewish identity. Eventually, he agreed to put on tefillin. As we said the Shema together, he began crying. He told us he felt that he finally broke free of the chains of communism.

It was a life-altering experience for him and for us. It brought into focus why we left our families and moved to Aruba: to be able to share the joy of Judaism, one soul at a time.

An old Jewish cemetery has fewer than a dozen graves, some of which date back to the early 19th century.