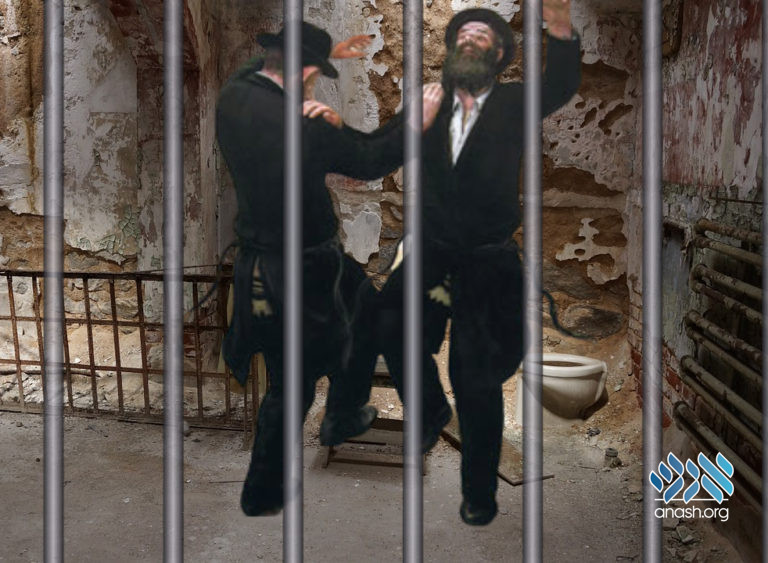 Tonight is the yahrzeit of Reb Elimelech of Lizhensk. What did Reb Elimelech and his brother Reb Zushe do when they were prevented from davening, and how does that apply to our situation?

Tonight is the yahrzeit of Reb Elimelech of Lizhensk. What did Reb Elimelech and his brother Reb Zushe say when they were prevented from davening, and how does that apply to our situation?

COVID-19. It was a meaningless jumble of letters and numbers to most of us just one month ago. By now, it has turned our lives topsy-turvy. It is starting to affect our routines in so many ways, and that seemingly includes our connection with Hashem – the way we daven, learn and fulfill mitzvos. Or is it?

The famous story is told (here and here) of the two brothers, the famed Rabbi Elimelech of Lizhensk and Rabbi Zushe of Anipoli, who were thrown into a prison cell full of common criminals, for no especially good reason. Reb Elimelech began to cry when he realized he could not daven Mincha due to the toilet pail in the corner, which made the room unfit for prayer.

“Why are you crying?” asked Reb Zushe. “Is it because you are unable to daven? The same Creator who commanded us to daven also commanded us not to daven in such a room! By not davening right now, we are achieving a connection with Hashem. True, it may not be the bond we sought, but if we truly seek divine connection, we should be happy that Hashem has afforded us the opportunity to obey His law at this time, no matter in which way.”

“You are right!” exclaimed Rabbi Elimelech. Jumping up, Rabbi Elimelech took his brother’s arm and began to dance with the unbridled joy that can only derive from performing the mitzvah of not praying in an inappropriate place. When the guards realized that it was the pail in the corner that the two Jews were so excited about, they promptly ejected it from the cell. The holy brothers then prayed Mincha undisturbed …

The analogy is obvious. We may not be involving ourselves right now with the Halachos of davening in an inappropriate place, but rather, with the halachos of doing our part in stemming the potentially serious ramifications of a worldwide pandemic. Either way, we are following the words of Hashem.

On Purim, we began the Megillah with two chapters describing the gross revelry and vulgar debauchery of Achashverosh and his henchmen. How is it even appropriate to read about such matters from the Shul bimah? Indeed, some opinions in the Gemoro insist that these sections should be omitted from the Mitzvah entirely. Still, Halacha requires us to read it. Why? The Rebbe explains it is because these chapters contain an eternal message. Events which seem inconceivable and downright absurd when they happen are very much part of a greater Master Plan. It took the Jews of Shushan almost a decade to comprehend the ramifications; may we understand our situation must sooner.

I would like to conclude with a plea to the community to come together in a meaningful way, even if this can’t mean physical closeness. Let us increase in helping others, give more Tzedakah and say more Tehillim. If you have any concerns or constructive criticism about the current situation and our response, feel free to be directly in touch with me about it.