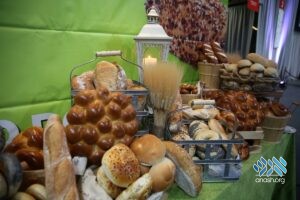 Ask the Rov: I’ve heard some people say that anything made with wheat runs into issues with brachos. Whats the halacha regarding pretzels, crackers or flatbread crackers mezonos or hamotzi?

Are flatbread crackers mezonos or hamotzi?

Hamotzi and birkas hamazon are recited on bread that is normally eaten as the basis of a meal. The bracha for grain pastries normally eaten as a snack is mezonos provided that one (a) eats less than the equivalent of six beitzim (336 grams), and (b) doesn’t become full. One who eats four kabeitzim (230 grams) and will be full—including from side foods—recites hamotzi on the snack bread; otherwise, he recites it over a kezayis of regular bread.

An illustration of “snack bread” brought in the Gemara is “Pas Haba’ah B’kisnin.” There are three approaches among the rishonim in defining this term (either from “koseis” meaning “nibble” or “kis” meaning “pocket”):

(1) Ingredients – The dough itself is cake-like since most of its liquid is something other than water—such as honey, juice, oil, milk, or eggs—thus making it flavorful and not fit to be eaten as bread. The same applies if regular bread dough was flavored to the extent that most people wouldn’t fill themselves up on it.

(2) Filling – A sweet filling—such as honey, sugar, nuts, fruits, or spices—was inserted into regular bread dough before baking and the filling is the primary part (e.g. apple turnover). Fillings consisting of food eaten for satiation or eaten with bread, such as cheese or vegetables, don’t take away its bread status.

(3) Texture – The dough is baked as dry crackers which are nibbled for snack and not as a meal.

In his Shulchan Aruch, the Alter Rebbe quotes all three views and rules that since safek brachos l’hakel we do not recite birkas hamazon on any of these, (rather mezonos and al hamichya which are somewhat appropriate even for bread). He notes, however, that a baal nefesh—a spiritually sensitive person—should eat the first and third categories, flavorful bread and crackers, only during a bread meal (when one will anyways be bentching).

Crackers and pretzels, besides fitting the third category, may also fit the first. They are often made with oil and other liquids, which places them in the first category if they are the majority. The same would apply if they are distinctly spiced or flavored.

In his Seder Birkas Hanehenin—a practical guide to brachos which was written later—the Alter Rebbe omits the third approach regarding crackers. Some understand this omission to be deliberate and therefore avoid pretzels or crackers made with a majority of water except during a meal. Others argue that it was simply left out of the more practical guide since crackers weren’t prevalent in that time and place, and they remain mezonos. If the crackers are spiced or flavored, even the more stringent view concedes that there is room for leniency.