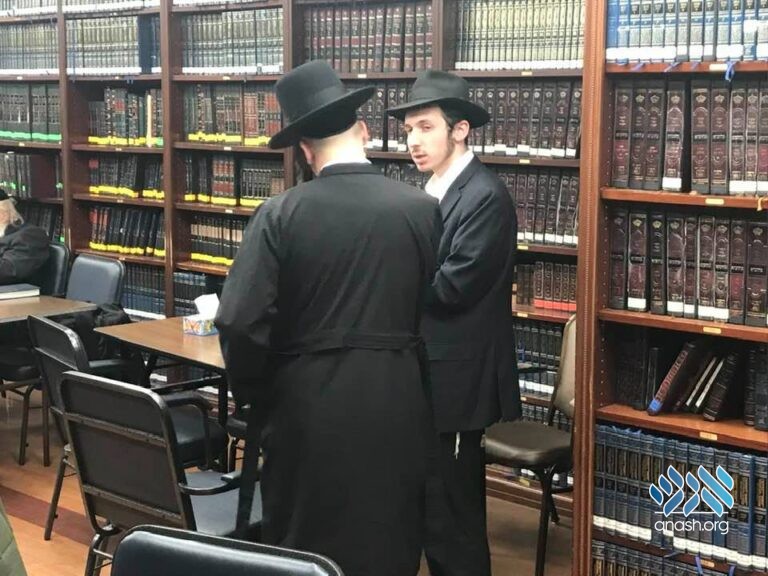 When R’ Mendel Roth, grandson of the Rebbe of Shmorei Emunin, and “musical mashpia“, encountered a Lubavitcher bochur in a shtibel in Boro Park, it left him so inspired that he felt the need to write up the encounter and post in on social media.

When R’ Mendel Roth, grandson of the Rebbe of Shmorei Emunin, and “musical mashpia“, encountered a Lubavitcher bochur in a shtibel in Boro Park, it left him so inspired that he felt the need to write up the encounter and post in on social media.

Below is Roth’s description of the encounter, translated from the original Hebrew.

I’m sitting on the third floor of the famous shtibel “Shomrei Shabbos” in Boro Park.

The third floor of Shomrei Shabbos has a special history and aroma, for those who know and are familiar. It is a small and forgotten corner in the most unforgettable place. All kinds and types end up there during the day.

In one corner, one can find a serious talmid chochom looking for somewhere to finish learning with a chavrusa. In another corner, one sees a hungry person who was looking for a place where he can grab a quick meal without someone judging you and giving you looks. Come in the middle of the night, and you find individuals who are far from average. You look in their eyes and remember the scary stories they told us at age 5 about those who kidnapped children or communicated with demons.

There is a lot that can be told about Shomrei Shabbos, and the stories that happen in all its different corners. Upstairs, downstairs, outdoors, and even the street corner where different souls meet every day, each creating their unique story.

One of the things you encounter in Shomrei Shabbos, is the hafatza of the young Chabad Chassidim. Downstairs they often project a screen with a video of the Rebbe, and all sorts of people stop to look and listen. At the same time, they solicit people to learn Chassidus and get to know the teachings of the Lubavitcher Rebbes.

This tzaddik in the picture comes here frequently. He stops people, and asks for permission to study a little Chassidus with them. Once he even managed to pull me to 770 in Crown Heights to participate in a farbrengen.

Tonight, I saw him standing up on the third floor, managing to stop one Stamar Chossid after the next and sit with them to learn some Chassidus.

The second bochur in the picture is a Satmar Chossid of about 19 years old. Hearing the young shliach’s question asking if he wants to learn Chassidus, he answered with a smile that he has exactly one minute to spare.

In the end, it lasted about 4 minutes. I look at them at the end of study, and they are both smiling and shining with a special light of pure love. The bochur asked the young shliach: “This is what you call ‘hafatza’?” And the shliach answers him: “Yes indeed, this is our mission: To spread the light of the Baal Shem Tov in the hearts of Yidden.” The Satmar bochur turned to me and says, in Yiddish, “s’iz mamash heilig” – it’s truly sacred…

And now to the most beautiful part of the story. This young shliach wanted to learn Chassidus with me, as well. But I had no head for it tonight at all. I told him that today I can’t, I had a really confusing day.

The bochur got immediately involved, and after a few minutes, he managed to find something for me there. “If I can’t help b’ruchniyos, spiritually, at least I can help b’gashmiyos, physically,” he said with a smile.

This bochur helped me find a charger for my iPhone… inside the shul… as I felt lost and confused, without a charged smartphone l’maan Hashem…

Lubavitcher Rebbe, listen well in your holy spot above. You brought good disciples into the world. You educated them to truly love another, humanity, common sense, and real action that brings light and love so pure, so pure and true. Rebbe, you nailed it.