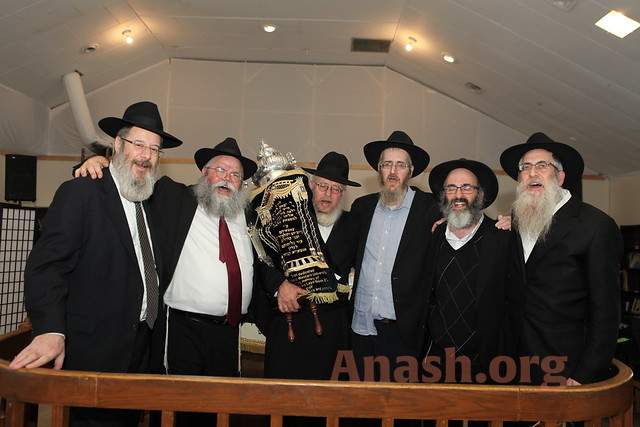 Chabad at Western University in London, Ontario, under the direction of shluchim Rabbi & Mrs. Mordechai Silberberg, celebrated a and on Sunday. Hundreds showed up despite the still frigid weather.

The Sefer Torah was written L’iluy Nishamos the late Professor Yitzchok Block and his wife Mrs. Laya Block, A”H, and was started on the Shloshim of his passing, in Cheshvan of 5778/2017.

Dr. & Mrs. Block were trailblazers in the field of Shlichus on a college campus. They first came to Western in and immediately began doing everything they can to bring Jewish students closer to Yiddishkeit.

Hosting tens of students every week for Shabbos meals, as well as other occasions. Dr. Block was a frequent guest speaker at the “” with students, both in New York and all over the world. They also started the local Hebrew Day School, as well as helped found the only Orthodox shul in town. Mrs. Block also ran a pre-school for over 40 years, educating hundreds of children over that time.

The ceremony was scheduled towards the end of winter and the school semester so that the weather would not be that much a factor, yet the students would still be in school. Despite the planning the weather was harsh, but not enough to dampen the spirits of those present.

“We wanted that the final letters of the be written on the campus of the university proper because the will be for the use and benefit of the students, said Rabbi Silberberg.”

The was then marched with much music and fanfare through downtown London, to the Chabad House, where the other were taken out to greet their new counterpart. Hakafos and a festive buffet meal followed.

Special thanks to all those who helped arrange the event, and to the Block children for traveling from far. As well, to the students of Western who helped organize this beautiful affair.