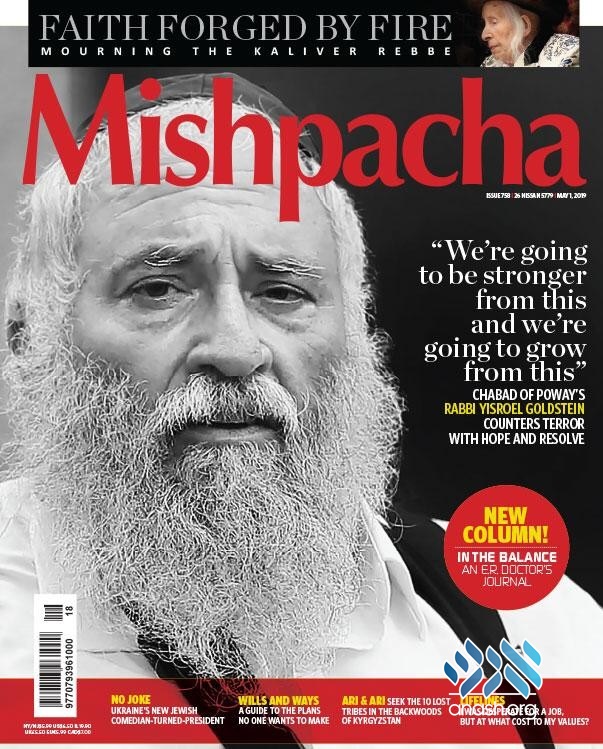 Mishpacha Magazine features Rabbi Yisroel Goldstien on it’s front cover. Below is an excerpt from the article.

Reading the haftarah on Acharon shel Pesach had always been a big deal to Rabbi Yisroel Goldstein. Long before he founded the Chabad of Poway 33 years ago, the sobs that accompanied the Lubavitcher Rebbe’s recital of Yeshayahu Hanavi’s vision for the days of Mashiach rang in his ears.

Between the fourth and fifth aliyos this past Acharon shel Pesach, Rabbi Goldstein left the sanctuary of the shul he led in the San Diego suburb and went to wash his hands in preparation for reciting the haftarah. He was stopped by Lori Gilbert-Kaye, a longtime member of the Chabad congregation and someone he and his family considered like a sister.

“Rabbi, when is Yizkor?” she inquired. Her mother had just passed away, and this would be her first time memorializing her at the Yizkor service.

Those were to be her last words. John Earnest, a 19-year-old white supremacist who had just posted an anti-Semitic manifesto online, stepped into the lobby with an assault rifle in his arms and wordlessly began shooting.

Lori, 60, was the first to fall. The gunman then aimed his rifle from close range at Rabbi Goldstein and took a few shots. The 57-year-old rabbi raised his hands in a defensive position to protect his face. The bullet blew off the index finger on his right hand and punctured the one on the left. The assailant then took another shot. And then a third. And a fourth. In what Rabbi Goldstein terms “nissei nissim,” a miracle of miracles, all of them missed. (For tefillos, Rabbi Goldstein’s full name is Yisroel ben Chana Priva.)

The incident has shaken Poway, a quiet rural suburb of San Diego where deeply rooted Americans live side by side with Hispanic, Russian, and Persian immigrants. On Sunday, the town’s mayor embraced Rabbi Goldstein, telling him that the town loves him and will stand by him through the ordeal.

“I grew up in 770 [Eastern Parkway, the world headquarters of the Chabad movement], and I used to listen to the Rebbe’s haftarah,” Rabbi Goldstein told Mishpacha in an interview from his home in the San Diego suburb, shortly after he was released from the hospital on Sunday afternoon. The amount of sobbing by the Rebbe leading to the haftarah was life-altering, especially when he got to the words “Odcha Hashem ki anafta bi — I thank You, Hashem, for You were angry with me, but You removed Your wrath and comforted me.”

“And the shooting,” says Rabbi Goldstein, “happened right before then.”

In a scene that will forever reverberate in the minds of those who witnessed it, the first responder to Lori was her husband, Howard.

A trained physician, Howard had hurriedly helped lead the children outside and returned to the center, noticing a woman lying face down on the floor.

He approached her and began performing CPR.

He suddenly recognized his patient and fell down in a faint.