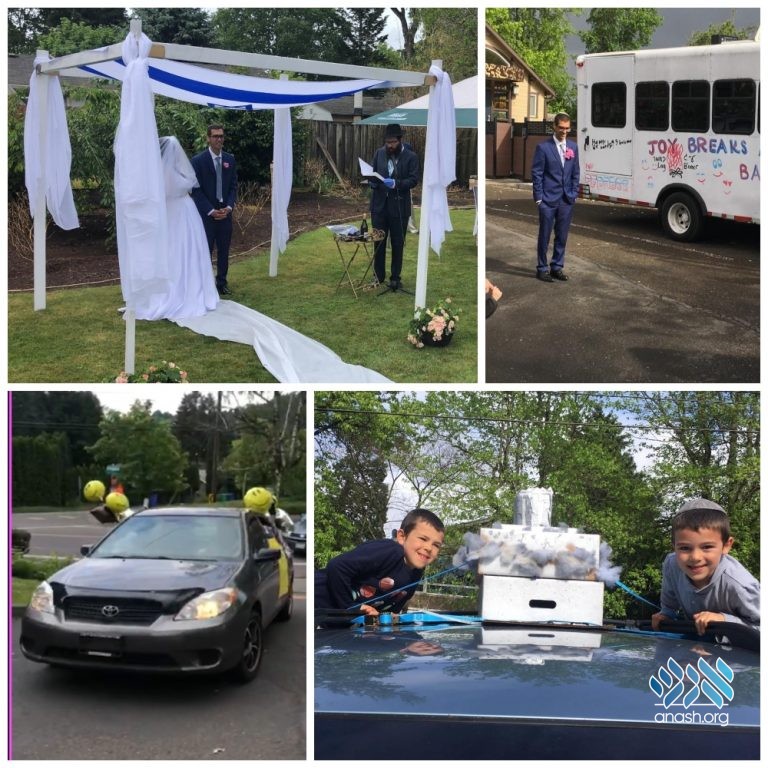 Portland experienced a Lag Baomer like no other, with its car parade escorting a local couple that got married that morning.

It was a memorable and special Lag Baomer morning in Portland, Oregon, as a small crowd gathered to celebrate the wedding of Oren Abu and Melissa Bloom, a longtime congregant of Chabad Portland.

Bloom’s attendance at Camp Gan Yisroel as a child was the seeding of a beautiful connection with Chabad that blossomed over the years, culminating in the establishment of yet another Jewish home.

Due to social-distancing regulations, the wedding was attended by only a minyan which included local shluchim, and was officiated by Rabbis Chayim Mishulovin and Menachem Rivkin.

The wedding celebrations flowed into the afternoon as the bride and groom joined 40 families for an exciting car parade through the city’s neighborhoods. At the head of the procession drove several fire and rescue vehicles and the Gan Yisroel Simcha bus.

“The Chosson & Kallah, parade participants, Portland Fire and Rescue and all our children who decorated their vehicles brought Lag Baomer’s message of joy and unity to Portland in a very unique way,” Portland Shliach Rabbi Motti Wilhelm told Anash.org.

“Despite the restrictions, the message of Lag Baomer was shared in a way that hadn’t been seen before,” he said.