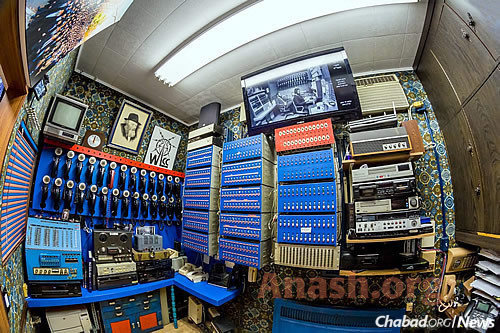 When members and supporters of the JEM Foundation from around the world gathered in New York City for the Foundation’s International Gala, they were treated to a number of special presentations. Here’s one of them.

A presentation entitled “Three Pioneers” showcased the early days work of recording and broadcasting the Rebbe’s voice and image in real time, in line with JEM’s mission today of sharing the Rebbe’s teachings and inspiration with audiences around the world through video, audio and photography.

The clip features Rabbis Aharon Goldstein, Chaim Boruch Halberstam, and Hillel Dovid Krinsky, all three pioneers in the proliferation of the Rebbe’s message.

Rabbi Goldstein’s father Rabbi Yose Goldstein recorded the talks in the early 50s and 60s. Rabbi Halberstam founded and directed WLCC which, beginning in 1970, broadcast the Rebbe’s public addresses across the world to over 600 locations live via telephone. And Rabbi Krinsky founded JEM, which facilitated the broadcast of the Rebbe’s addresses live via satellite and on cable television.