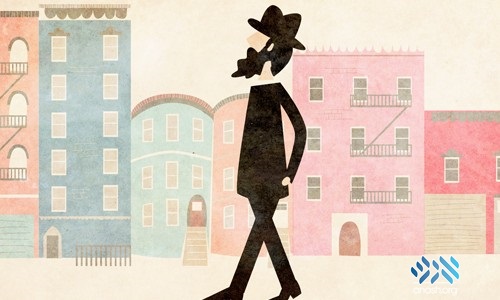 It’s Yom Tov, and scores of Chabad chassidim are leaving the Crown Heights neighborhood of Brooklyn on foot—some walking as far as Queens and Upper Manhattan! No, it’s not some fitness craze. It’s Tahaluchah.

Early on in his leadership, the Rebbe began an initiative that continues to this day. He encouraged his chassidim to visit other synagogues on festivals, in order to share joy and inspiration near and far. Since Jewish law prohibits the use of cars and other vehicles on Yom Tov, this meant walking to even the furthest destinations.

Decades later, Tahaluchah continues to be a central feature of Yom Tov, and something like a rite of passage for Chabad chassidim. Neighborhoods change, demographics shift, new generations of walkers replace the old, but Tahaluchah marches on, rain or shine.

Of all the Rebbe’s initiatives, there was something very special about the way he encouraged Tahaluchah and displayed his appreciation to those who participated. Take a walk with me down memory lane to get a sense of the urgency and importance we felt on Tahaluchah . . .

It was the 1980s, and I was a teenager. The Tahaluchah left the Rebbe’s synagogue, “770,” in broad daylight, the streets filled with chassidim walking four or five abreast, all singing joyously. The song wafted through the streets; it pulsated in our hearts. The Rebbe stood at the door of the synagogue, encouraging the singing with his trademark upward sweep of the arm as he watched the procession march off. His eyes penetrated the crowd, seeing each of us off as individuals and following us until the last had passed from view.

Our walking groups were comprised of yeshivah students and married men of all ages. Certain individuals were assigned to specific synagogues, some groups were pre-arranged, but most went with the flow and split up along with the crowd.

There was a palpable energy, a spring in the step, excitement and anticipation in the air. New York City police escorted us for the first portion of the way; they closed streets and directed traffic, adding to the parade-like feel. As we walked, splintering into smaller groups, dusk would descend and the air would cool. Some neighborhoods felt safer, others less so. In some of the more Jewish neighborhoods, people would greet us with cold drinks and encouragement.

On some holidays, especially on Shavuos, it was not unusual to encounter rain, very heavy at times. I recall several occasions when the rain was so heavy and the puddles so deep that the dye of our black hats and blue trench coats seeped right through every layer of our clothing.

On Pesach and Shavuos, when we arrived at our destination, one individual in each group would share a Chassidic teaching and words of inspiration between the Minchahand Maariv prayers. We’d converse a bit with the congregants, add fresh new faces to the worn pews or old chairs, and brighten the holiday with a brisk and lively dance after the prayers ended.

Simchas Torah was different. The influx of energetic dancing feet and enthusiastic singing voices helped transform and uplift a synagogue of any size. The festivities were especially meaningful in that Tahaluchah participants often danced shoulder to shoulder and hand in hand with Jews whom they had never previously met and perhaps wouldn’t meet again.

Some synagogues were well-established, filled with worshippers; many were in older Jewish neighborhoods with diminished attendance, and they especially welcomed the thrice-annual holiday influx of spirit and inspiration. Each synagogue had its characters: There were the warm, welcoming types who greeted us enthusiastically, grateful for our arrival and participation. There was the inevitable dismissive cynic with a disapproving glance or occasionally some harsh words. Those who did business abroad glowed with appreciation of Chabad’s presence in far-flung places, and every so often someone would share a story about a personal interaction he experienced with the Rebbe.

On the way back, the streets were dark and near-empty. We walked past shuttered storefronts with their locked metal grates, on sidewalks of varying widths and states of repair. In earlier years, when safety in certain neighborhoods was a concern, we’d meet up at central locations to walk home together in larger groups. In later years, as conditions improved, there was less of a throng coming home, and though there was little singing, the atmosphere was inspired and warm, with animated conversations filling the air. As we walked through deserted commercial strips and residential streets, we shared Chassidic stories and teachings over the rumble of traffic and the occasional blast of boombox music.

Nearing Crown Heights, our pace quickened, and as different groups converged, the crowd thickened. Not all groups came back at the same time, but some were greeted by the Rebbe himself awaiting them at 770. On Simchat Torah night, we would join the Rebbe’s pre-hakafot farbrengen already underway.

Through these treks away from the Rebbe’s synagogue we actually felt even more connected to the Rebbe. The Rebbe made it clear that he expected us to share our celebration with other Jews, and that he cherished every step we took along the way. Today, the Rebbe is no longer with us physically, yet we maintain a real sense of the Rebbe sending us off, accompanying us on our way, and awaiting our return.

Tahaluchah is not simply about the destination, or about its overt purpose. Yes, the intent is to help other Jews rejoice. But the journey itself, and the sense of service, of connection to something bigger than oneself, is an integral part of the experience. Tahaluchah’s impact on us, those who walk the walk, is perhaps even more potent than the impact on the people we are walking to inspire and celebrate with.

Regarding holiday celebrations, Rambam writes: “A person who closes the gates of his courtyard and eats and drinks with his children and his wife, without feeding the poor and the embittered, that’s not rejoicing associated with a mitzvah, but rather it is merely the rejoicing of his own stomach.” The emphasis that the Rebbe placed on Tahaluchah ingrains in us the principle that another’s needs come first. Our own service of G‑d, our own celebration of the festival, remains incomplete unless we share it with others. A fellow Jew must come first!

That is why Tahaluchah remains so central to the Yom Tov experience in Chabad. It embodies the central axiom that the Rebbe emphasized at the very onset of his leadership: “Love of your fellow Jew leads to love of G‑d.”

The lived experience of Tahaluchah teaches us that to feel the closeness, you have to walk the distance.

It’s hard to speak of Tahaluchah without mentioning Reb Dovid Raskin. On paper, if you didn’t know him, this man may have held more power than anyone else in Chabad. He served on all the central boards of Chabad, from its yeshivah system to its vast global outreach network. He chaired the Lubavitch Youth Organization and also served Chabad’s social services arm. He may have been the only chassid serving in a leadership capacity in all of Chabad’s umbrella organizations. But Reb Dovid knew nothing of power. He was humble and subservient to the core, devoted with every fiber of his existence.

Reb Dovid especially cherished Tahaluchah; it meant the world to him. More than any other chassid, he is associated with Tahaluchah because of how much he looked forward to it, and how he spoke of it at farbrengens and gatherings. Why did he care so much about Tahaluchah? Perhaps because it so powerfully embodies his ideal of the chassid as a loyal foot-soldier, marching out on the Rebbe’s mission with unwavering devotion.

There was another Tahaluchah of sorts that Reb Dovid did annually. Each year, the New York State Legislature honored the Rebbe’s birthday with an “Education Day” resolution and luncheon. For years, at the Rebbe’s direction, Reb Dovid would attend, making the trip to the New York State Capitol in Albany from his home in Brooklyn. In his waning years, greatly weakened, he needed a wheelchair to get around. But despite the increasing hardship, he insisted on making this annual trek each spring. For him, it was simply unthinkable not to. One of those years, Governor George Pataki attended the celebration in the Capitol’s Red Room. Pataki, especially tall and broad shouldered, loomed over the stooped figure of Reb Dovid in his wheelchair, bent down to him and said, “Rabbi Raskin, you tower over us all!”