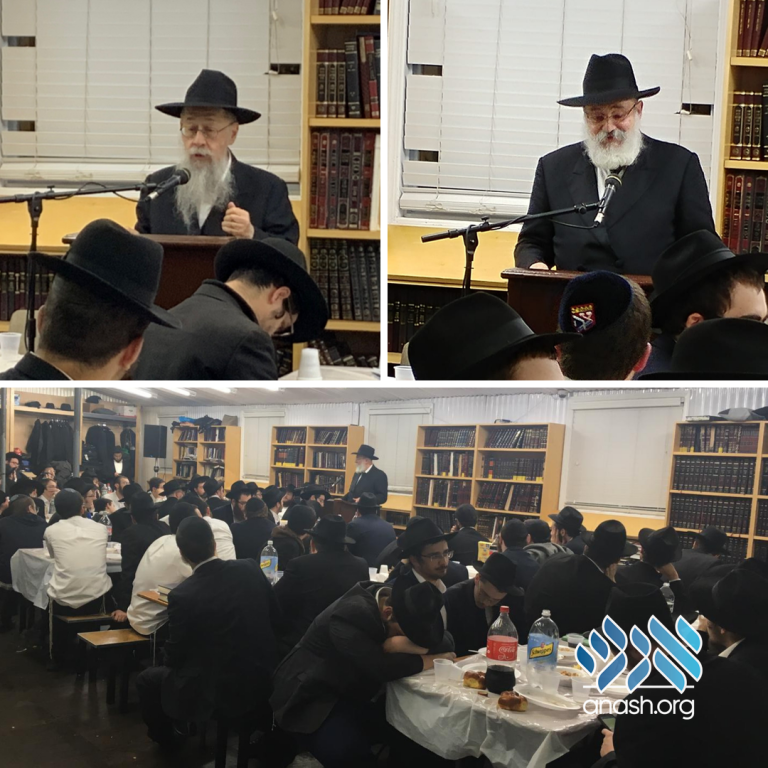 The 55th Yartzeit of the Rebbe’s mother, Rebbetzin Chana, was marked with hundreds gathered by the Ohel to spend the special day near the Rebbe.

Here are some highlights of the Farbrengen:

Rabbi Dovid Dubov, shliach of the Rebbe to Princeton, NJ, and author of Yalkut Levi Yitzchok on the works of the Rebbe’s father, relayed a sicha that the Rebbe said regarding Rebbetzin Chana. In a time that it was hard to find even the most basic necessities to survive, Rebbetzin Chana distinguished herself with also providing her husband, Harav Levi Yitzchok, the ability to write chiddushei Torah in the midst of their exile.

The reason that she did this, the Rebbe explained, was in order to hurry the coming of Moshiach which is dependent on “hafotzas hamayonos chutza”.

Rabbi Dubov proceeded to share a Dvar Torah of the Rebbe’s father.

Rabbi Nochum Kaplan, director of the “Chinuch Office” and “Vaad Rabbonei Lubavitch”, shared a number of special personal encounters that he had with Rebbetzin Chana.

After fleeing Communist Russia, Rabbi Kaplan’s family was next door neighbors with Rebbetzin Chana in the DP camp in Poking in 5707, and after immigrating to America, they continued to share a warm relationship.

Rabbi Kaplan related how a short time after his Bar Mitzvah he met Rebbetzin Chana who asked him if he remembers anything from Poking. Rabbi Kaplan replied that he did not and Rebbetzin Chana said that she would like to share a memory of him and she wants him to remember it. She recounted that as a youngster of one-year-old, Rabbi Kaplan would play in front of the barracks that they were living in and his mother would put a little hat on him. However, he didn’t like the hat and would take it off.

“When I would see that I would run after you and make sure you were wearing your hat”, Rebbetzin Chana said. “This is because I heard from my husband that a child should not be allowed to walk around with his head uncovered in the street and this is nogea to the Yiras Shomayim of the child”.

Rabbi Kaplan also shared his memories of accompanying Rebbetzin Chana to the Rebbe’s Hakofos, being present in her home when the Rebbe visited and of her passing.

Rabbi Yossi Kamman, director of the ‘A Chassidishe Derher’ magazine, spoke of the nachas that the Rebbe received from institutions which were established bearing the name of the Rebbetzin and reminded the crowd to donate to Keren Chana, the fund established by the Rebbe to provide tuition loans for girls to continue their Torah education.

Rabbi Sholom Ber Chaikin, Rov of the Chabad community in Cleveland, Ohio, spoke of the need to make sure to channel the hisorerus of this special day into fulfilling the Rebbe’s rotzon in day to day life. Following the official Farbrengen Rabbis Kaplan, Chaikin and other shluchim farbrenged long into the night.

Watch a replay of the Farbrengen here: