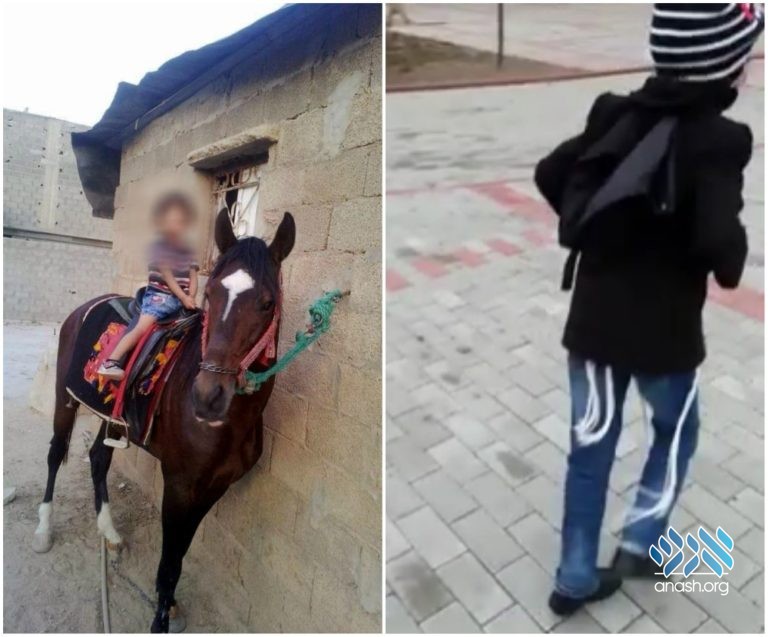 One of the last few Jews in Libya was able to return to her roots with the help of the Yad L’achim organization’s Muslim country division.

Sabrin, 30, was born in Benghazi, Libya to a Jewish family that had been forced to hide its religious identity. Officially, the last Jews left the country 41 years ago, with the rise to power of the madman Muammar Gaddafi, but a few isolated individuals, including Sabrin’s family, chose to stay put out.

Her grandfather, who’d served in the Libyan army for many years, preferred the known, as bleak as it was, to the risks of starting over in a new country.

Sabrin was a third-generation hidden Jew. Her grandfather and grandmother married off their three children to Jewish families who were also in hiding in the coastal city of Benghazi, and Sabrin was one of five children of the oldest daughter.

“We lived like Marranos,” she says. “When my grandmother was alive, every Shabbos we would travel to her isolated estate and celebrate the holy day there, without anyone in the area knowing about it. We feared for our lives.”

With the passing of her grandmother, the family’s connection to Judaism weakened. While they held on to some traditions, they drifted away from their roots, integrating into their Muslim surroundings. When Sabrin was 17, she married a local Arab, but unlike her three older sisters, who also married Arab men, she felt she could reveal the truth about her roots, after witnessing his tolerant attitude towards Jews.

The years passed, and with the outbreak of the civil war in Libya, during which her only brother was killed in the fight against Gaddafi and buried as a Muslim, Sabrin understood that her future wasn’t in this bloodthirsty North African country. She decided to study medicine in Eastern Europe, where she was joined by her Arab husband and children. The children, who are Jewish according to Halachah, were enrolled in a Catholic school in the large city in which they settled.

But then came a surprising development. One day, at a local laundromat, Sabrin spotted a sticker with a Magen David and a sentence in Hebrew. It shook her. She realized that for the first time in her life she was in a position to meet Jews who openly practice their religion. Embarrassed, she asked the proprietor whether she knew of any Jews in the area and was told that the proprietor’s brother was married to a local Jew and that the city had no less than 30,000 Jews and a thriving community. Before long, Sabrin was reaching out to the local Jewish community and asking to join.

But it wasn’t simple. By the nature of things, Sabrin was viewed with suspicion, and after deliberations was rejected by the head of the community who suspected she might be an impostor. Saddened, Sabrin continued with her life, hoping and praying that the day might come when she’d be given the opportunity to reunite with her people.

Less than half a year later, Sabrin happened upon a film produced by Yad L’Achim in Arabic, calling on lost Jews – children and grandchildren of Jewish women who had married Muslims in Arab countries, to contact the organization in order to return to Judaism. Sabrin’s heart skipped a beat. She wrote to the email listed at the end of the film and within minutes was contacted by a Yad L’Achim security official.

Sabrin was asked to present documentation showing that she had been born to a Jewish mother and, after much effort, came up with her birth certificate, and those of her Jewish mother, grandmother, and great-aunt. She expressed a desire to live a full Jewish life, which included leaving her Muslim husband and registering her children in the local Jewish school.

After receiving other relevant documents it asked for Yad L’Achim, contacted the Rabbi of the city and asked for his assistance on her behalf. When he agreed to help, two Yad L’Achim officials flew to the Eastern European country to meet with Sabrin, her husband, and the Rabbi.

At their meeting with Sabrin and her husband, the Yad L’Achim officials explained to him in Arabic that they had come to help his Jewish wife who wanted to return to Judaism and would help her every step of the way. The husband was shocked; but he understood that his wife was serious, and that she had the strong backing of both the local Jewish community and Jews from Israel who spoke Arabic. He agreed to separate from her, on one condition: That the apartment they had rented together, which had a five-year lease, would remain in his possession.

After meeting with the Rabbi, Sabrin and her children celebrated the month of the holidays at the city’s magnificent Great Synagogue, with the entire community enlisting to help her. Together with Yad L’Achim, the community helped her rent another apartment.

After the holidays, Yad L’Achim moved Sabrin to the capital city of that country, to create a distance between her and her Muslim husband. The children have since been enrolled in a local Torah school and Sabrin is about to undergo a “Return to Judaism” ceremony in the local Rabbinical Court.

Yad L’Achim is now trying to help Sabrin’s parents and sisters. After her parents turned down its request that they leave Libya, the organization is now planning a rescue of Sabrin’s sisters, now living in Tripoli, from their Muslim husbands.

“Time will tell,” said one official, “but we’re convinced that, b’ezras Hashem, by the end of this year, the rescue of the sisters and their Jewish children will be behind us.”