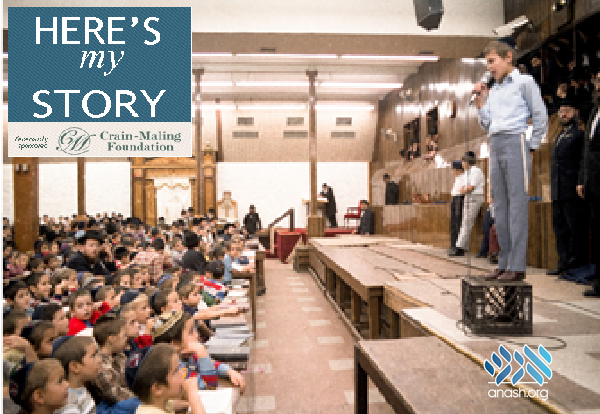 I grew up in Johannesburg, South Africa, in a traditional though not a Torah-observant home. But when I was a kid, my uncle, Dr. Rodney Unterslak, returned to South Africa having become religious while living in England, and he greatly influenced me. I would often spend Shabbat in his home and I quickly developed a deep love for Judaism.

At the time, I was attending a Jewish day school, but no children in the school were religious. When I started wearing a yarmulke and tzitzit to school – the only student to do so – the principal suggested to my parents that I would be better off attending a school like the Torah Academy, a Lubavitch school in Johannesburg. My parents agreed; and I started fourth grade there.

Shortly after I enrolled, my mother took me for a routine eye exam during which the doctor saw something that gave him pause, and he asked my mother to bring me back for a more thorough checkup. This checkup displeased him even more and he referred me to a specialist.

To make a long story short, after a visit to not one but several specialists, I was diagnosed with an eye disease called retinitis pigmentosa. This disease causes degeneration of the retina, night-blindness, loss of peripheral vision and sometimes total blindness. The younger a person is when the disease first appears, the more severe the loss of eyesight is likely to be. To this day there is no cure for it.

When the diagnosis was made, the doctors said there was nothing that they could do for me – the only recommendation they had was that I start wearing sunglasses, as the sun could accelerate the progress of the retina degeneration.

Naturally, my parents were very upset to hear that their son was going to lose his eyesight. They felt quite helpless until my uncle Rodney suggested that, since the doctors were not offering any hope, we take a trip to see the Rebbe in New York.

We flew out together with a group of about a dozen other people from South Africa who wanted to spend the end of the Sukkot holiday with the Rebbe.

We arrived in New York on the morning of Hoshana Rabbah, which was a Wednesday, September 28, 1983, and as soon as we got to Chabad Headquarters, we got in line to receive lekach, honey cake, from the Rebbe. I was standing with my uncle Rodney who introduced me as “Yisroel Shlomo Swimmer from South Africa.” He didn’t say anything about my condition, so imagine my surprise when the Rebbe handed me a piece of cake and said to me in English, “May the Alm-ghty grant that you should learn Torah with open eyes.”

Obviously, the Rebbe’s words caused a lot of excitement and happiness. As far as everyone was concerned, the Rebbe had spoken, and I was going to be a hundred percent fine.

The holiday ended with a farbrengen, and my uncle Rodney told me to go and sit under the Rebbe’s table with the other kids. I was not so keen on this, as the farbrengen was very crowded and chaotic. Today, I wish I had made more of the opportunity, but I was just a kid back then, and all I wanted to do was to go home.

Before that could happen, I still had some doctors to see, because my uncle Rodney had made appointments with specialists in Manhattan. I had to go through more of the tests I had undergone previously – tests I found unpleasant because they involved dilating my pupils so everything went blurry and shining bright pin-point lights into my eyes.

The visits to the specialists were on Monday, and on Tuesday, there was a children’s rally at Chabad Headquarters where I was asked to lead the crowd in reciting one of the twelve verses from the Torah selected by the Rebbe. After the rally was over, I met my uncle Rodney who was waiting to tell me the most astonishing news – the results from the tests showed that there was absolutely nothing wrong with my eyes! In fact, the doctors declared that it’s impossible that they had examined the same child who had undergone the previous testing as indicated by the medical records because there was absolutely no sign of retinitis pigmentosa.

Naturally, my parents were ecstatic and, when we went back to South Africa, the doctors there confirmed that whatever signs of the disease they had previously seen were gone – there was nothing wrong with my eyes.

Subsequently, I visited the Rebbe several times as I grew older. I sought his advice on a career path, and I received my accounting degree and continuing to be Jewishly involved. At university, I was looked at as a rabbi, giving Torah classes, learning with people and helping with different Chabad activities. I think this had a lot to do with the blessing I received from the Rebbe. It set a direction for my life and it infused everything I did afterwards.

When I got married, my wife and I continued to live in South Africa while I completed by internship; we then decided to move to New York, and I transferred over with the same firm which employed me in South Africa.

I need to mention here that I never wore glasses as a child. I only started wearing glasses at the age of eighteen because of a slight natural astigmatism in one eye. Once, as I was getting my prescription updated, I got pretty shaken up when the optometrist said he needed me to come back for some extra tests.

By the time I got home, I had worked myself into a panic. I said to my wife, “Maybe I messed up the Rebbe’s blessing. He told me to learn Torah with open eyes. Maybe I haven’t done that enough.” It was a stressful time for me until the tests were completed a week later, and I learned that there was nothing to worry about. But the incident served as a reminder of what I had been through as a kid and how the Rebbe saved me.

This brings me to one more story related to this whole matter.

On a visit to Israel one year, I decided to visit the Children’s Museum in Holon where they have a very special presentation called “Dialogue in the Dark.” It’s for children and adults, and you walk with a stick through a series of rooms which are pitch dark – and even sit down and try to eat – so that you can learn what it feels like to be blind.

While there, I asked our guide, whether he had been born blind or had become blind later in life. He said he became blind at twenty. And how did that come about? He answered, “I got a disease called retinitis pigmentosa.”

And I thought, “That could have been me.”

In conclusion, all I can say is thank G-d I was healed. My life would have turned out very differently were it not for the Rebbe’s intervention and G-d’s grace.

Mr. Yisroel Swimmer resides in Lawrence, New York, where he is chief financial officer at Tilebar, a tile retailer. He was interviewed in April of 2019.