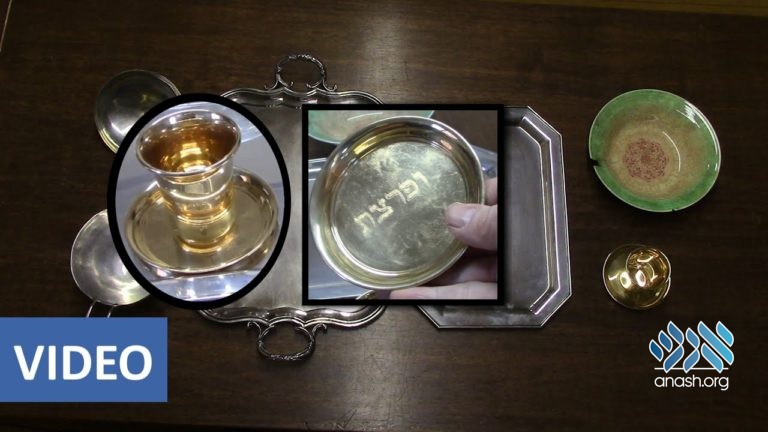 Watch: in honor of the upcoming yomtov of Pesach, Rabbi Berel Levin, chief librarian of the Central Chabad Library, shows the two Ka’arot of our Rebbes, and the Kiddush cup of the Rebbe.

In honor of the upcoming yomtov of Pesach, presented here are two Ka’arot of our Rebbes, and the Kiddush cup of the Rebbe:

A) The Ka’arah of the Rebbe Rayyatz, Rabbi Yosef Yitzchak of Lubavitch.

On the underside, there is the following hallmark, That indicates that it was created in Russia in 1856, during the leadership of the Rebbe the Tzemach Tzedek. Thus, there is reason to assume that this Ka’arah was also used by the Rebbes who preceded Rabbi Yosef Yitzchak.

B) The Ka’arah of the Rebbe.

On the underside, there is the following hallmark, That indicates that it was created in the USA, in year 1950. Prior to Pesach 5711 (1951), the Rebbe sent Rabbi Yaakov Hecht to purchase a Ka’arah with eight corners, and from then on the Rebbe used it for the Seder.

From this we learn that until the year 1950, when the Rebbe was sitting at the Seder-Table of his father-in-law, the previous Rebbe, the Rebbe would arrange the matzot on a cloth, not on a Ka’arah.

C) A gold Kiddush cup, which the Rebbe used for Kiddush in the later years on Pesach.

This cup was given to the Rebbe by the Chosid R. Aharon Klein on the 11th of Nissan 5722 (1962). He had the cup engraved with the Hebrew words “ימים על ימי מלך תוסיף” (“Add days to the days of the king”) – from a verse in Chapter 61 of Tehillim, which the Rebbe began to say that day, when he turned 60 years old.

D) A broken vessel (especially broken), which was used for pouring the wine into, when reciting the Ten Makkos.