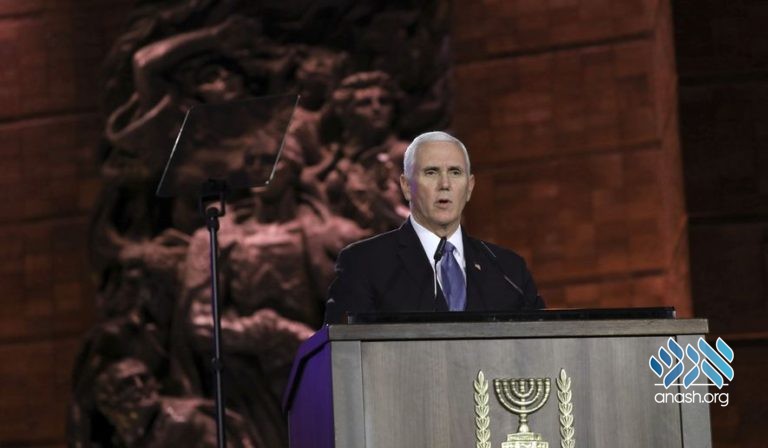 Vice President Mike Pence concluded his remarks at the World Holocaust Forum with the prayer for peace recited daily by Jews around the world.

Leaders from over 40 nations gathered in Israel this week for the fifth World Holocaust Forum.

During Thursday’s event at Yad Vashem, Vice President Mike Pence gave a stirring speech vowing that never again will the world allow destruction like that of the Nazi era to befall the Jewish nation. In his address, he honored those who were murdered in the holocaust as well as those who survived its horrors.

“We gather to fulfill the solemn obligation, an obligation of remembrance, to never let the memory of those who died in the Holocaust to be forgotten by anyone anywhere in the world,” Pence said. “We remember the names and the faces and the promise of the 6 million Jews who were murdered in the Holocaust, Today we also pay tribute to those who survived, who all these years have borne witness to that evil and have served mankind by their example.”

.He went on to urge those gathered to recommit themselves to fighting against modern-day violence and hate.

“We must have the courage to recognize — all the leaders and the nations that are gathered here — that today we have the responsibility and the power to ensure that what we remember here today can never happen again.”

At the conclusion of his powerful address, he recited the words ‘Oseh Shalom,’ a prayer for peace recited by Yidden daily in shemona esreh.