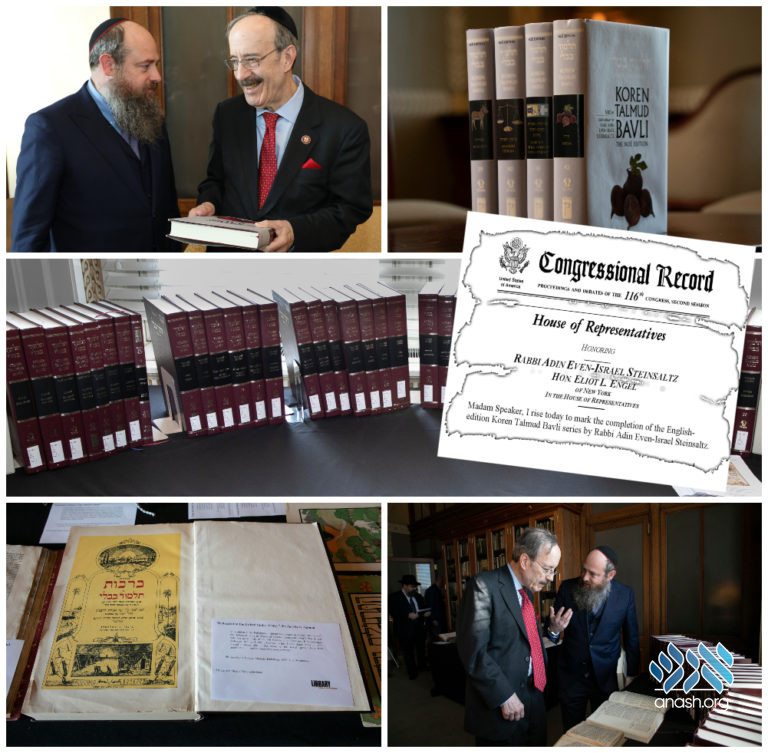 A ceremony in the US Library of Congress marked the introduction of an entry into the Congressional Record lauding Rabbi Adin Even-Israel Steinzaltz and the completion of the Noé Edition Koren translation of Talmud Bavli.

History was made this week as Congress honored renowned Chabad scholar Rabbi Adin Even-Israel (Steinzaltz) with an entry in the Congressional Record and a ceremony in the Library of Congress where the Noé Edition Koren Talmud Bavli was formally presented to the library.

In his remarks, Rep. Engel noted that Rabbi Steinsaltz has authored more than 60 books, and hundreds of articles on Jewish mysticism, religious thought and philosophy. He is “the first person since medieval times to have completed a full translation and commentary on the Babylonian Talmud.“ Engel added that he was also pleased “to mark the complete series entering the Library of Congress. As the nation’s preeminent library, it is truly an honor for Rabbi Steinsaltz’s work to be housed in the Library of Congress.”

Rep. Engel read the words he had read into the Congressional Record which laud Rabbi Steinzaltz for his lifetime of achievement, especially noting the recently completed Noé Edition Koren Talmud Bavli. Rabbi Meni then presented the first volume of the Steinsaltz Talmud to Rep. Eliot Engel.

“To the best of my knowledge, this is the first time in the nation’s history that the Congressional Record discussed the Talmud” Rabbi Meni Even-Israel told Anash.org “this definitely can be described as a real dirah b’tachtonim.”

The event in the Library of Congress also showcased some of the oldest and rarest seforim in the library, with a focus on historic volumes of the Talmud printed throughout the centuries.

The event was organized by the Aleph Society, which supports Rabbi Steinsaltz’s efforts in the United States.