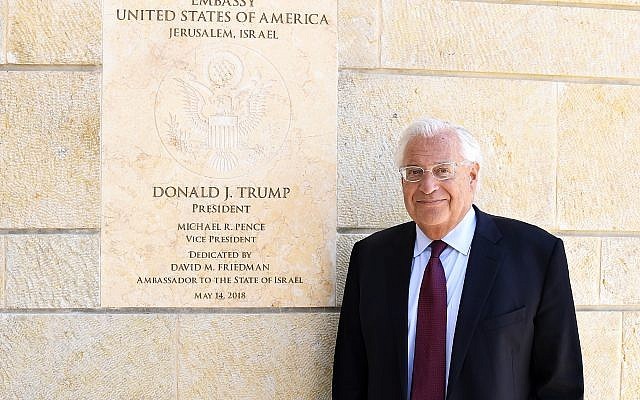 Addressing the crowd, Ambassador David Friedman said he is “deeply grateful for the love.”

Mr. David Friedman was nominated as US Ambassador to Israel in December of 2016, and confirmed in March of 2017. In 2019, The Jerusalem Post listed him as one of the world’s 50 most influential Jews.

During his time as Ambassador, the United States Embassy was moved to Yerushalayim, thus recognizing it as the capital of Israel. Just last month, Secretary of State Mike Pompeo publicly denounced the notion that Israeli settlements in the West Bank are illegal.

Attending the Kinus for the eighth time, Mr. Friedman noted that the network of Chabad shluchim is a leading contributor to the rebirth of Judaism following the Holocaust. He spoke about how Chabad helped him personally, and his relationship with Five Towns shliach Rabbi Zalman Wolowik.

“To all those shluchim out there: There is no greater gift that you can give to your congregation than the study of Torah,” Mr. Friedman said.

Ambassador Friedman also related his first experience davening at the Rebbe’s Ohel, and the immediate answer he received to his prayers. He then encouraged anyone viewing the Kinus online who hadn’t yet had the chance to visit the Ohel to do so.

“Like the former Brittish Empire, the sun never sets on the Chabad community,” Mr. Friedman concluded.

Watch a replay of the banquet at Anash.org.