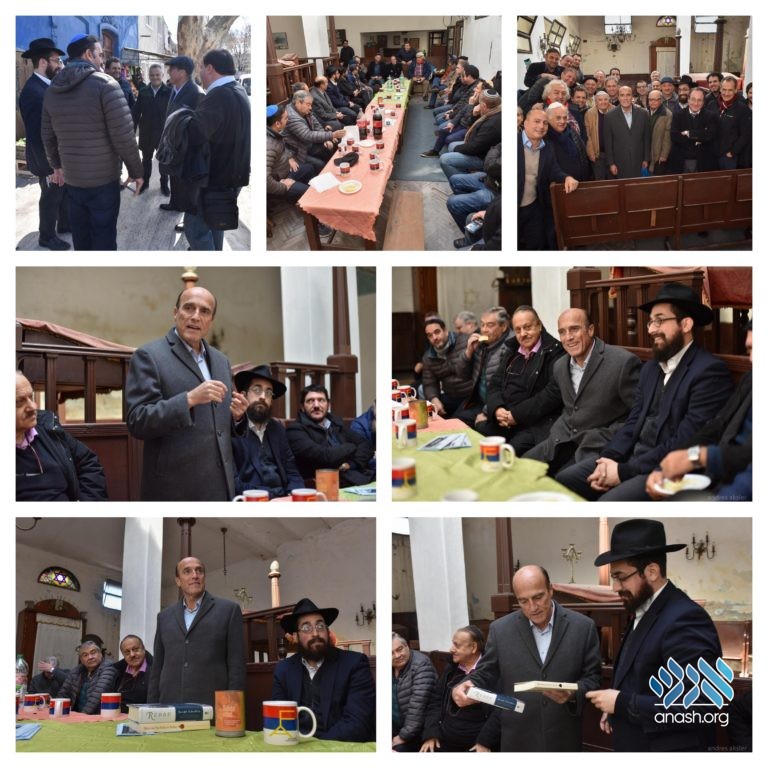 General elections will take place in the South American country of Uruguay on the 28th of Tishrei/27th of October. As such, candidates are going around, “pressing the flesh,” and greeting potential voters. If no presidential candidate receives a majority in the first round of voting, a runoff will take place on the 26th of Cheshvan/24 of November.

Presidential candidate Ing. Daniel Martinez from the “Frente Amplio” party visited a group from Chabad of Montevideo on the 13th of Av. He was greeted at the historic “Beis Haknesses Harishona, also known as the “Inca Shil,” by shliach Rabbi Mendy Shemtov and community members. The shul is situated in the older Goes neighborhood, also known as the “Barrio de Los Judios” (the Jewish neighborhood).

There, Lubavitch runs a monthly lunch and learn for the local shop-owners, giving life to the last remaining shul of the once bustling Jewish neighborhood (said to once have had 7 shuls, two schools and a mikveh that the Friedrdiker Rebbe helped build).

He was presented with several books, after hearing from Rabbi Shemtov about the Rebbe’s campaigns of a moment of silence and sheva mitzvos.

Mr. Martinez is considered to have the highest chance of winning the election, but may be vulnerable in a runoff election, should he not get the 50 percent amount needed to win in round one.