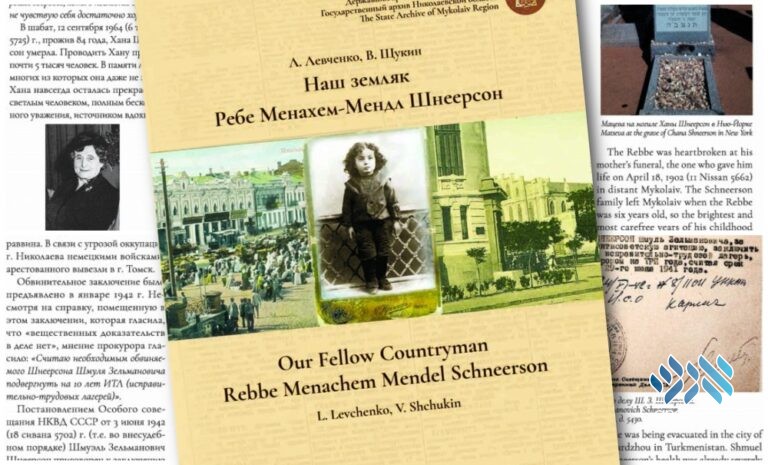 A new book highlighting the Rebbe’s roots in Nikolayev was recently authored by two Ukrainian professors, based on their own local documents and perspective. It’s now available in English.

When Rabbis Elkanah Shmotkin and Boruch Oberlander began research on the Rebbe’s upbringing in Nikolayev, Ukraine, for Jewish Educational Media’s Early Years, they could not have imagined the political and cultural impact their work would have on the local populace. Now, nearly fifteen years after the initial contact with the Ukrainian government, a new book has been published by the State Archives of the Nikolayev Region.

Authored by two prominent local professors Dr. Larysa Levechenko, Director of the State Archive of the Nikolayev Region, and researcher and Historian Dr. Vladimir Shchukin, Our Fellow Countryman: Rebbe Menachem Mendel Schneerson is a thoroughly researched and richly detailed historic account of the Rebbe’s family’s life and times in Nikolayev.

Beginning with the Rebbe’s maternal great-great-grandfather, Rabbi Avrohom Dovid Lavut, a devout Chasid of the Tzemach Tzedek, who was appointed as the city’s first rabbi in 1850, the book explores almost one hundred years of the family’s presence and sheds new light on the contributions of the Rebbe’s parents as well.

According to Rabbi Levi Greisman, project manager and researcher of Early Years, the years of research and hundreds of email and phone correspondences with the Ukrainian authors helped them appreciate the legacy of the Rebbe and his forbearers. But it wasn’t until the Chabad Shliach to Nikolayev, Rabbi Shalom Gottlieb, began introducing scores of visitors from around the world to the city that the local scholars began to fully grasp the magnitude of the Rebbe’s global prominence.

According to Rabbi Gottlieb, who arrived in 1996 together with his wife Dinah, the local population had little contact with the world outside their borders. “When large groups from across the world to see the places of the Rebbe’s childhood, city officials began to internalize the scope of the Rebbe’s sphere of influence,” explained Gottlieb. “It instilled a sense of pride in the fact that someone from their own town had gone on to become such an important figure of international renown.”

In 2016, when newly-elected Mayor Oleksandr Syenkevich was tasked with renaming some of the city’s streets from Russian to Ukrainian in order to pay tribute to their own history and its heroes, the Mayor felt it would be an honor to rename a street after the Rebbe. Unfortunately, the announcement was met with some opposition.

A local journalist began an anti-Semitic front against the decision, inciting a smear campaign in the media in an effort to derail the Mayor’s plans.  A townhall meeting was proposed to debate the issue, and Rabbi Greisman asked Drs. Levechenko and Shchukin if they would be willing to participate. “It would be more convincing” Rabbi Gottlieb recalled, “if local officials who knew the most about the city’s history and of the Schneerson contribution would present their professional opinion.”

At the charged hearing, the historians laid out the case for why it would be an honor for the city to name a street named for its “most illustrious citizen.” The official re-naming ceremony was attended by Rabbis Shmotkin, Oberlander and Greisman, along with a large contingent of JEM supporters from across the globe.

For Levechenko and Shchukin, the renaming celebration and the events leading up to it were the impetus to publish a book geared toward the local populace. “These events for Larysa and me were confirmation of the fact that in Nikolayev and in Ukraine very little is known about the Schneerson family,” explained Dr. Shchukin. “But lives and work are so closely connected with Nikolayev. That’s what led us to fear this book, which would be addressed to both Jews and non-Jews. Thanks to the collaboration with JEM, we were able to audit and classify the documents that we have at our disposal and this is reflected in our work.” According to the authors, hundreds of copies of the 160-page book, written in Russian and English and filled with facsimiles and photographs, have already been supplied to schools and libraries across Ukraine.

A group of individuals who participated in JEM’s Early Years experience, who had been present at the street dedication ceremony, donated toward translating the book to English, making it accessible to wider audiences. A lead grant from Osher and Rivka Karnovsky, dedicated in memory of their son Shmuel who recently passed away at age 15, was especially meaningful. “Our Shmuel was named after Rabbi Shmuel Grossman, who was known as ‘Shmuel Nikolayever’,” said Mr. Karnowsky. “Dedicating this book in his memory really is the closing of a circle for us.”

While the Jewish world has seen a plethora of books on the Rebbe over the years, this marks the first time that non-Jewish authors, and specifically those from the former Soviet Union, have done so, based on their own local documents and perspective. “The significance of such an undertaking cannot be overstated” observed Rabbi Shmotkin.

“The Rebbe would always ascribe great importance to government recognition. Though that usually meant acknowledgment of the Lubavitch movement or the newest Mitzvah campaign, it has tremendous value here where the government archives of the Rebbe’s birthplace published this book documenting the family’s lineage in the city.

“Rabbi Levi Yitzchok, Rebbetzin Chana, and the Rebbe’s other forebears each left a lasting impression, and it’s heartwarming to see the authors’ thorough treatment on the subject.”

As the title suggests, Our Fellow Countryman is not merely another biography about another great figure observed from afar. Its goal is not merely to have Ukrainians discover the Rebbe, but to help rediscover themselves.