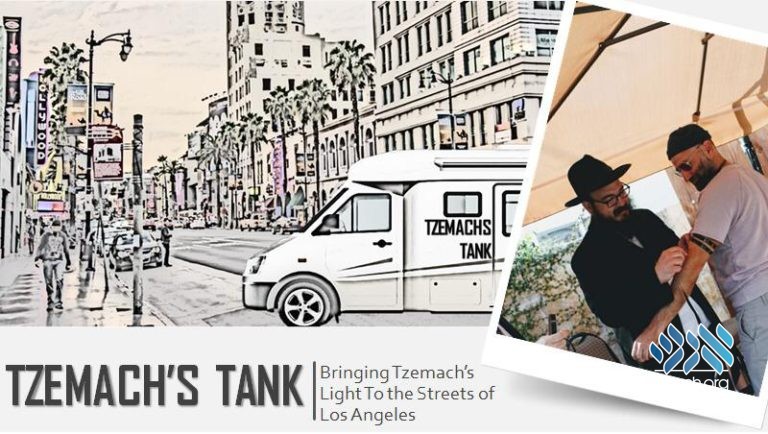 In honor of the shloshim for Rabbi Tzemach Cunin, family and friends pledge “Tzemach’s Tank.”

Today, we are marking the Shloshim of Rabbi Tzemach Yehoshua Cunin ע״ה, shliach of the Rebbe and director of Chabad of Century City, who was taken from our midst at the young age of 43.

A month ago, while Tzemach’s nephews were watching the Levayah from summer camp in Montreal, thousands of miles away, they watched in pain and anguish as Tzemach was being put to rest — while screams of “Ad Mosai” and pain can be heard and seen. At that very moment, the climax of it all, they asked each other: “What can we do for Uncle Tzemach?” And they decided: A new mitzvah tank! Tzemach’s Mitzvah Tank.

At that moment of unspeakable pain and tragedy, the very first moisad to be established in Tzemach’s name was born.

As Tzemach’s sons Mendel and Levi finished saying Kaddish, they watched as their grandfather Rabbi Boruch Shlomo Cunin שליט״א, the Rebbe’s head shliach and director of Chabad on the West Coast began to say: “We will not fall to this tragedy, but we will rise and overcome this darkness…” Rabbi Boruch Shlomo Cunin then continued saying that we will start with making 25 new mosdos in honor of Rabbi Tzemach Yehoshua Cunin, ע״ה.

Tzemach’s life mission was dedicated to helping others, physically and spiritually.

As the youngest son of יבלחט״א Rabbi Shlomo Cunin שליט״א, the Rebbe’s head emissary to the West Coast, Tzemach had a particular enjoyment in helping his fellow Jews fulfill a Mitzvah, and particularly the Mitzvah of Teffilin.

The “Mitzva Tank” was originally invented in 5730/1970 by Tzemach’s father. It is a “Mobile Chabad House” — an educational and outreach center on wheels, with the mission to bring the joy of Judaism onto the street for those that didn’t necessarily make it to the synagogue.

“A tank is undeterred by trenches and pits, and simply crosses them to reach the other side. An iron barrier — the weight of the tank simply crushes it. This is the purpose of the [mitzvah] tank: if there is a [spiritual] pit or trench, or even a barrier — things that are not associated with holiness — it nevertheless can go and fulfill its mission to dispel evil and introduce good and G‑dliness into the world.”

The Mitzvah Tank goes a long way with Tzemach,

When Tzemach’s father moved to Los Angeles in 5725/1965, he brought the idea of a mobile Jewish library which he started in New York with him. Facing opposition from a Jewish establishment uncomfortable with overt Jewish expression, he took matters into his own hands.

Finding a trailer for sale, Rabbi Baruch Shlomo Cunin, director of Chabad of the West Coast, managed to get a 35-foot behemoth for $5,000, no money down — he transformed it into a mobile station for Jewish engagement.

He drove the trailer up and down the West Coast. “We went to schools, to military bases,” he says. “I drove it all the way to Sacramento. People came in, and it was like entering a new world; it blew people’s minds.”

The trailer played a pivotal role in Jewish outreach. It went from a resource for books to a robust hub for Jewish practice. Now on two coasts, these vehicles were poised to help affect the masses at a decisive moment in modern Jewish history by providing Jewish content to a post-Holocaust generation searching for greater meaning and purpose, and by laying the groundwork for the widespread use of these vehicles during the Tefillin Campaign launched in the days leading up to the Six-Day War, when the Rebbe called on Jewish men and boys age 13 and older around the world to unite in fulfilling the mitzvah.

Tzemach’s Mitzvah Tank will proudly drive through the streets of Los Angeles, the city where Rabbi Tzemach was raised to dedicate his life to the mission of helping others by bringing the light of Judaism to the outside world.

May this great Mitzvah Tank fight the darkness of exile and kindle the light in others, one soul at a time, and through Jewish unity and love of Torah, bring Moshiach Now!