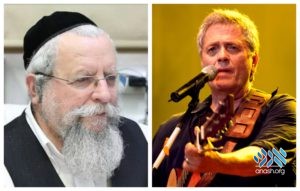 Ezra LeMarpe, an Israeli organization which provides free medical support, canceled a performance that had been planned to raise funds. The event was planned as a tribute concert for famous Israeli singer Shlomo Artzi, and all proceeds were to be donated to Ezra LeMarpe.

Rabbi Avraham Elimelech Firer, who heads the organization, had one request from the organizers of the event – that only male singers perform, to avoid the issur of kol isha.

The request raised a storm of criticism and various performers announced that they wouldn’t play at the concert due to the exclusion of women. Artzi, who is a secular singer, was attacked for agreeing to Rabbi Firer’s stipulation.

At the same time, many others decried the “secular coercion”- including many secular people- with some secular performers even offering to play at the event for free.

It was pointed out that Rabbi Firer, who is deeply respected for his tireless lifesaving work provided for all stripes of society, was not excluding women. He did not request that women be prevented from playing instruments or speaking at the event; his only request was that no female performers sing so as not to transgress halacha.

“I’m requesting that the fundraising performance not be held,” Rabbi Firer wrote to the organizer. “I never was involved in organizing fundraising events. Ezra LeMarpe had the merit of serving over a million people so far, no matter what religion, ethnicity or gender. I draw my strength from halacha. I am proud of my way of life and will adhere to my life mission: saving lives, and loving others, including those who are different.”

Transportation Minister Bezalel Smotrich’s National Union party responded to the cancellation by saying: “Liberal terrorism has won. The cancellation of the fundraising performance for Rav Firer’s wonderful chesed organization is a low point in Israel society.”