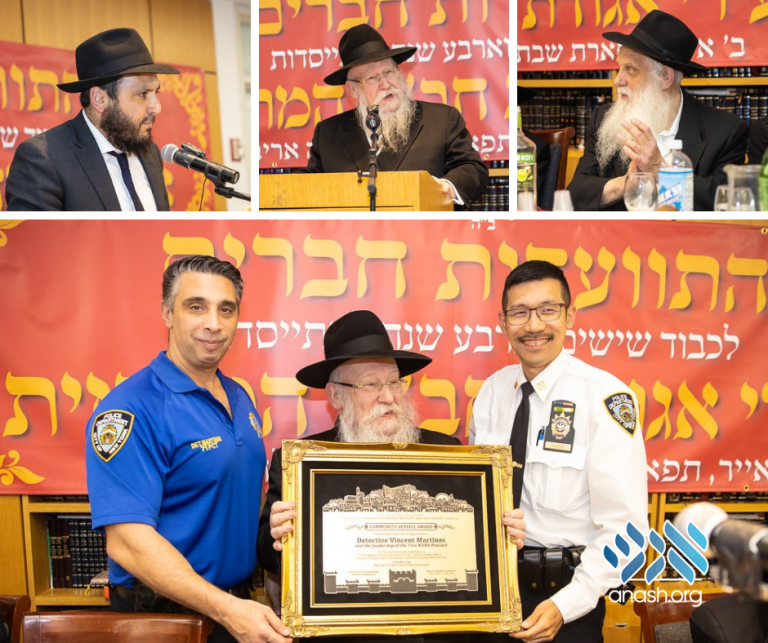 Shluchim from the Metropolitan Greater New York Area, under the auspices of Tzeirei Agudas Chabad, attended the Annual Dinner and “hisvaadus chavreim,” held every year on Beis Iyar, the day the organization was founded by the Rebbe in 5715/1955, at the Jewish Children’s Museum in Crown Heights on Monday night. Rabbi Dovid Raskin was the founding chairman until his passing in 5771/2011.

This year’s special guest was Rabbi Shimon Raichik, rov of anash in Los Angeles. Rabbi Raichik may have been asked to deliver a speech, but it was ultimately a “standing farbrengen.” He spoke about his late father, Rabbi Shmuel Dovid Raichik, and how as children the Raichiks learned about the Rebbe from him and his actions. How his father lived for the Rebbe, and that was his whole life. “This is our job today, our children need to see Rebbe from us,” Rabbi Raichik continued.

Rabbi Kastel made mention of the fact that Tzach is working on creating more pegishas – the very successful weekend programs that bring unaffiliated Jews to Crown Heights to see and breathe Yiddishkeit. He also spoke about how the doors are always open to shluchim that need assistance, and that shluchim are encouraged to make use of those resources. Rabbi Butman mentioned the fact that Tzach had a horo’oh from the Rebbe that being that they were in the “paltrin shel melech” – the Rebbe’s home state – they had an obligation to be more careful and stringent in all matters concerning Torah and Shulchan Aruch.

Rabbi Sholom Ber Tenenbaum of Crown Heights was added as a member of the Tzach Board of Directors.

In earlier years, the Rebbe would ask Tzach representatives to speak at the farbrengen of Simchas Beis Hashoevah, with the Rebbe in attendance. In the biography of Rabbi Zalman Gurary, it is brought in his name that he said the Rebbe’s so-to-speak “zohir tfei” is Tzach. That this mosad was more important to the Rebbe than all others.