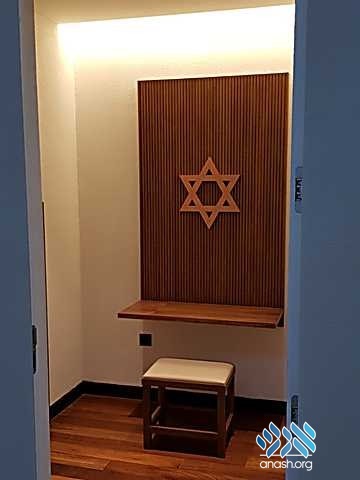 Turkey – Istanbul’s new airport, which is set to be the largest in the world, now boasts two synagogues, Ynet reported on Sunday night.

The two Jewish prayer rooms in the airport are set to be located in the regular and business class lounges, and there are plans to open one in the general hall as well. The initiative was undertaken by Turkish Airlines.

The airline provides between 600 to 5000 kosher meals every day,” Rabbi Mendy Chitrik, the Chabad emissary and Ashkenazi rabbi of Turkey explained to Ynet.

“There are more Turkish Airlines flights from Tel Aviv to Istanbul then from Istanbul to London,” he added.

Chitrik also supplied each of the little synagogues with Jewish prayer books that will accommodate for both Ashkenazi and Sephardic Jews, “so that everyone who passes through the airport can pray.”Advertisement:

He further described the synagogues as “small, but nice. It warms the heart that also in Istanbul, every Jew that wishes can put on Tefillin and pray.”

The initiative comes as Istanbul’s old airport Ataturk had no Jewish prayer room or synagogue. The new airport is located 35 km northeast of the bustling city, close to the Black Sea.

Turkish Airlines flies to 122 different countries across the globe, including Israel.